Appointed as amicus in support of an appellant who filed a case against the warden of the Bureau of Prisons alleging that the Bureau of Prisons had a policy of violating its regulations by depriving those being held in solitary confinement of exercise and other privileges that the regulations allowed them. The district court dismissed the case as moot. After briefing by a team of students and oral argument by a student, the D.C. Circuit held that Reid alleged sufficient facts warranting reversal and remand. 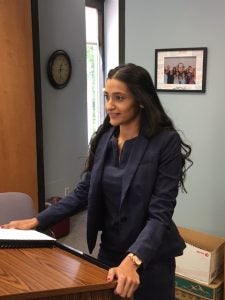 Appointed to represent a habeas applicant alleging ineffective assistance of trial counsel because: (1) counsel did not object when the courtroom was closed to the public during jury selection; and (2) counsel failed to advise Aguiar of the sentencing consequences if he turned down the plea offer and went to trial. The D.C. Circuit held that Aguiar could not establish ineffective assistance for counsel’s failure to object to the courtroom closure because he had not shown that he was harmed by that closure, but it also held that Aguiar had sufficiently alleged that his counsel did not accurately advise him of the sentence he faced if convicted at trial. It therefore reversed and remanded to the district court.

Appointed as amicus in support of an appellant who challenged, under the Administrative Procedure Act, the Attorney General’s failure to comply with a treaty between the United States and Canada governing the transfer of prisoners. The district court concluded that the APA did not provide a cause of action to challenge transfer decisions. After briefing and oral argument by a team of students, the D.C. Circuit held that the APA provides limited review of transfer decisions, but Sluss failed to establish that the Attorney General acted arbitrarily and capriciously.

Appointed to represent a transgender civilly confined petitioner who challenged the state’s failure to provide treatment for gender dysphoria. The Eleventh Circuit reversed the district court’s dismissal, holding that Hood should have been given the opportunity to amend her complaint. On remand, the State adopted changes to its transgender policy in line with the requests in the lawsuit.

Appointed to represent habeas petitioner whose case was dismissed sua sponte because of a waiver of appeal and habeas in his plea agreement. After briefing and argument by a student, the Eleventh Circuit reversed, holding that the district court erred in raising this affirmative defense sua sponte.

Appointed to represent appellant who sued under the Federal Tort Claims Act after he was injured in a federal prison and his suit was dismissed. After briefing by a clinic team and oral argument by a student, the Fourth Circuit reversed and held that appellant had alleged sufficient facts that the district court should not have dismissed.

Represented a miner, Browning, sued by another miner alleging violations of the Federal Mine Safety and Health Act. Browning won before the Commission, and the miner petitioned for review. After briefing and oral argument by students, the D.C. Circuit held that Browning had not interfered with the statutory rights of the other miner and denied the petition for review.