Since the 2016 presidential campaign, immigration is at the forefront of the nation’s consciousness — most recently, with respect to family separations and zero-tolerance policies at the border.

What role is immigration likely to play in the November mid-term elections? How has the administration acted to restrict the pathways to seek and gain asylum in the United States?

What are the legal and policy issues surrounding the separation of migrant families, an increased focus on denaturalization, and the unveiling of a proposed public-charge rule that could deter significant numbers of legal immigrants and their U.S. citizen dependents from accessing public benefits to which they are entitled?

L. Francis Cissna (L’95), director of U.S. Citizenship and Immigration Services (USCIS) at the U.S. Department of Homeland Security, delivered a keynote address examining the proposed public charge rule — prescribing how DHS determines whether an alien is inadmissible to the United States under the Immigration and Nationality Act because he or she is likely to become a public charge. “DHS recently posted to its website a notice of proposed rulemaking relating to the public charge…the proposed rule, if finalized, would change the standard that DHS use[s] for determining whether an alien at any time would become a public charge and therefore inadmissible.”

The proposed rule, once published, will allow the public to comment for 60 days, he noted. The rule would not impact the vulnerable alien populations that Congress has exempted, including refugees, asylees, trafficking crime victims and certain beneficiaries of humanitarian programs, he said. “We will take the time we need to, to go through all the comments and put out a final rule as quickly as possible,” he said. 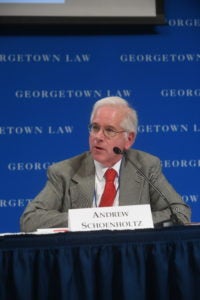 Professor from Practice Andrew I. Schoenholtz.

Professor from Practice Andrew I. Schoenholtz, co-director of Georgetown Law’s Center for Applied Legal Studies and director of the Human Rights Institute, led a panel on what he called “an unparalleled narrowing of access to asylum in the United States.” Panelists analyzed the Attorney General’s recent decision to overturn a Board of Immigration Appeals case in an attempt to eliminate domestic and gang violence as grounds for granting asylum.

Other new policies discussed included prosecuting asylum seekers who cross the border unlawfully for the first time as criminals; pushing back families without valid visas who seek asylum at ports of entry despite laws to the contrary, and the lengthy detention of families seeking asylum. Other panels looked at the separation of migrant families and unprecedented administration actions including the attempt to terminate DACA and the much-litigated travel ban.

“Our goal of this conference is to present the range of viewpoints that are shaping today’s immigration policy debates,” said Andrew Selee, president of MPI. “We believe that it’s vital to have a forum where people who approach these issues from very different ideological assumptions and professional pursuits can come together to discuss immigration policy issues in a thoughtful and civil way.”