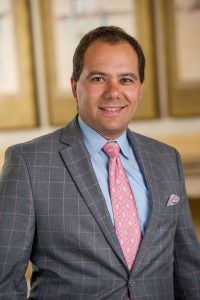 The Georgetown Center for the Constitution welcomes Ilya Shapiro as its executive director and senior lecturer. He will join the Center on February 1 after serving as a vice president and director of the Robert A. Levy Center for Constitutional Studies at the Cato Institute, and publisher of the Cato Supreme Court Review. Shapiro will oversee all aspects of the Center’s activities with an emphasis on its Originalism Outside of Academia initiative.

Georgetown Law Professor Randy Barnett, the Center’s faculty director, commented: “Ilya is a highly influential brief writer, an expert on the history of Supreme Court nominations, and one of the premier public commentators on constitutional law. I could not be more thrilled at the prospect of his joining us. With Ilya’s skill set, he will greatly expand the scope of the Center’s activities both within and beyond Georgetown Law.”

In 2020, Shapiro published the bestselling Supreme Disorder: Judicial Nominations and the Politics of America’s Highest Court, which was described as, “must-read for anyone interested in the Supreme Court” by Utah Senator Mike Lee and “the essential guide for these times” by Jan Crawford, chief legal correspondent for CBS. Shapiro has testified numerous times before Congress and state legislatures and has filed more than 400 amicus briefs in the Supreme Court.

Shapiro regularly contributes to a variety of academic, popular, and professional publications, including The Wall Street Journal, Washington Post, USA Today, National Review, and Newsweek. He appears frequently on radio and television commenting on Supreme Court decisions and other constitutional matters. In 2015, National Law Journal named him to its 40 under 40 list of “rising stars.”

On his decision to come to Georgetown, Shapiro observed: “I’m excited to begin the next phase of my career at one of the foremost academic institutions in the country. As the Center for the Constitution celebrates its tenth year, I hope to build on its previous success and grow its influence over constitutional law and legal discourse in the academic, judicial, media, and policy worlds.”

William M. Treanor, Dean and Executive Vice President commented: “I am very pleased to welcome Ilya Shapiro to the Georgetown Law community to which the Georgetown Center for the Constitution has added so much. I look forward to his contributions to its important endeavors.”

Shapiro earned his JD from the University of Chicago (where he became a Tony Patiño Fellow), following his MSc from the London School of Economics and AB from Princeton University. He clerked for Judge E. Grady Jolly of the U.S. Court of Appeals for the Fifth Circuit. Shapiro also served as a special assistant/​adviser to the Multi‐​National Force in Iraq on rule‐​of‐​law issues and practiced at Patton Boggs and Cleary Gottlieb.

For more information, please contact the Office of Communications at mediarelations@law.georgetown.edu.

Georgetown University Law Center is a global leader in legal education based in the heart of the U.S. capital. As the nation’s largest law school, Georgetown Law offers students an unmatched breadth and depth of academic opportunities taught by a world-class faculty of celebrated theorists and leading legal practitioners. Second to none in experiential education, the Law Center’s numerous clinics are deeply woven into the Washington, D.C., landscape. Close to 20 centers and institutes forge cutting-edge research and policy resources across fields including health, the environment, human rights, technology, national security and international economics. Georgetown Law equips students to succeed in a rapidly evolving legal environment and to make a profound difference in the world, guided by the school’s motto, “Law is but the means, justice is the end.”