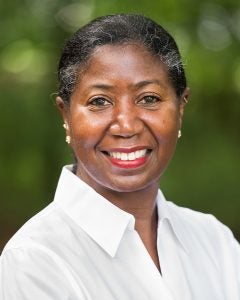 “We are thrilled to welcome Diann Rust-Tierney as our Drinan Chair in Human Rights for this academic year,” said Georgetown Law Dean William M. Treanor. “Diann is a recognized and respected leader with decades of experience advocating for civil rights and human rights. She will be a tremendous asset to our students and to the Law Center community.”

Rust-Tierney has more than 30 years of experience in federal legislative and executive branch advocacy on civil and human rights and spent the last 16 years as executive director of the National Coalition to Abolish the Death Penalty. As Drinan Chair, she will participate in Human Rights Institute programming, serve as a resource for students and faculty, and deliver Georgetown Law’s annual Drinan Chair Lecture on Human Rights. She will also teach a human rights course in the Spring semester.

“I stand on the shoulders of so many who came before me in the struggle to end the death penalty,” Rust-Tierney said. “It is my privilege and honor to be able to share what I’ve learned with students at Georgetown Law. There is an urgent need right now for courageous, creative, and determined human rights lawyers with a deep understanding of the intersectionality between human rights struggles here domestically and human rights abroad.”

The Fight to End the Death Penalty

Rust-Tierney’s record on human rights advocacy includes facilitating the development and implementation of a national strategy against capital punishment in the United States using strategic communication and policy advocacy to change attitudes and shift public opinion. Rust-Tierney’s work reflects the imperative of engaging, equipping, and supporting citizen advocates in the struggle for human rights.

Rust-Tierney has served as an expert resource to members of Congress and their staffs on capital punishment. She has testified before Congress, been widely quoted in the press, and appeared extensively in the national media. She has spoken to audiences around the country; participated in legal training programs; and served as a keynote speaker, panelist and lecturer at universities, colleges, and law schools across the country.

The Drinan Chair was established in 2006 in honor of Professor Robert F. Drinan, S.J. Drinan, who served on the Georgetown Law faculty from 1981 until his death in 2007, and was also a priest, scholar, lawyer, politician, activist, ethicist and one of the nation’s leading advocates for international human rights. He dedicated his life to humanitarian causes and to improving the legal profession.

Rust-Tierney recalled Drinan’s work against the death penalty, including in 1973 when President Nixon called on Congress to reinstate the death penalty after the Supreme Court ruled capital punishment unconstitutional as applied.

“That same day, Father Drinan introduced a bill that would prohibit it,” Rust-Tierney said. “Father Drinan was among the first people I met when I began my work against the death penalty at the ACLU. I was struck by his wisdom and clarity. He taught us that capital punishment does more than harm the people ensnared in that dreadful system. It has an insidious and corrosive influence, corrupting our values and our democracy. It is a special honor to be named to the Human Rights Chair that bears his name.”

Rust-Tierney added that she was especially pleased to have the opportunity to work with Elisa Massimino, the new leader of the Human Rights Institute at Georgetown Law.

“I have long admired Elisa’s work and her passion for human rights,” she said. “I am very much looking forward to the opportunity to collaborate with her and support her vision for preparing the next generation of human rights lawyers to take up the challenges ahead.”

Rust-Tierney is a member of the U.S. Supreme Court and District of Columbia Bars. She holds a law degree from the University of Maryland Francis King Carey School of Law and a B.A. in Political Science from the College of Wooster.