“This is a moment that I look forward to every year…” said Dean William M. Treanor, as he welcomed incoming students to Georgetown Law on Thursday, August 29. 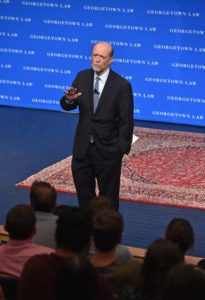 While earlier classes might disagree, the entering Fall 2019 J.D. and LL.M. classes at Georgetown Law may be the strongest yet. In the J.D. class, as Treanor noted, there are 16 teachers (7 from Teach for America), 18 members of the military, 4 newspaper reporters, 10 Fulbright Scholars, 8 Ph.D.s, a standup comedian and much more.

“You are remarkable not simply because of the credentials that you bring…but because we are looking for people who are capable of making a difference, who are capable of carrying out our mission: Law is but the means, justice is the end,” Treanor said. “Out of ten thousand applicants, we selected you because we saw in you someone who could make the world a better place.”

One of those is Mirabella Nwaka (L’22), who spent two years teaching middle school in Atlanta through Teach for America. The daughter of Nigerian immigrants, Nwaka was encouraged by her parents to follow her passion of becoming a lawyer. She grew up in Upper Marlboro, Maryland, and went to Spelman College in Atlanta. “Education was a beautiful career,” she said of Teach for America, “but I was still interested in the law, so I applied to Georgetown. It’s a dream school.” 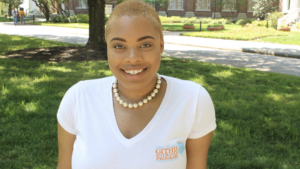 “That was an amazing experience,” Nwaka said of the mock moot court. “To see how the professors were able to articulate their ideas, to see legal analysis in action, to me, was invaluable. That’s [what] we are supposed to learn in law school. Because I was able to see the end result at the beginning, it allowed me to see the big picture.” 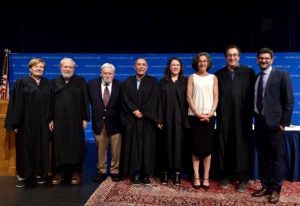 Faculty participate in a mock moot court for students during Orientation Week.

Earlier in the week, Treanor and other members of the Georgetown Law community welcomed the 360 international and 193 U.S.-trained LL.M. students. The LL.M. and S.J.D. students come from 65 countries and 36 different states and territories, speak 48 languages and have graduated from 215 law schools. Some arrived on campus in July to participate in a special Orientation for international students, called Foundations of American Law [see related story].

“It is [terrific] every year to see the new class of students who come from all over the world, with many different backgrounds: linguistic, ethnic, and legal, to form the class in our LL.M. program,” said Professor James Feinerman, associate dean for graduate and international programs, as he welcomed the international students. “Things are just getting started.” 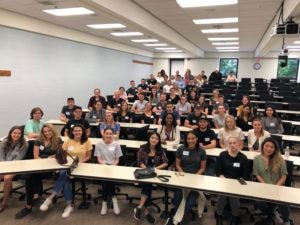 “This was a fantastic way to get the school year started,” said Matthew Leiwant (L’22), a Bowdoin College graduate who hails from New York City. “I got to meet my new colleagues in a less formal environment while helping an organization doing wonderful work. Everyone at Food & Friends was lovely and welcoming and made it easy to help.” 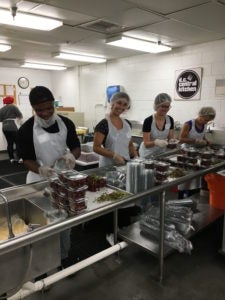 Leiwant decided to go to law school because I was working in public policy idea creation and decided I wanted to be more involved in enacting of policies rather than just thinking about what would be best in the abstract. “I chose Georgetown because D.C. seemed like the best place to get experience with that kind of work.”

Juliana Lord (L’22), who hails from Berlin, Massachusetts, volunteered with the Central Union Mission: “I really appreciated having the opportunity to participate in a service project with my fellow classmates. Georgetown Law’s commitment to public service is one of the school’s most important aspects to me, so this project allowed me to get a sense of future service opportunities while doing good and getting to know my peers.” 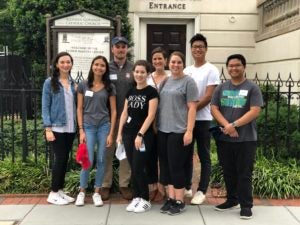 Lord is excited to be in Georgetown Law’s Section 3, with its alternative “Curriculum B.”

“I became interested in law school after majoring in international studies in college and specifically studying human rights and humanitarianism,” she said. “I knew I wanted to use my knowledge and skills in this area to help others, and when I thought about the best way to do this, I thought of the law… I was drawn to Georgetown Law, [which] is dedicated to utilizing the law to [achieve justice]. To that end, there are numerous opportunities such as the Supreme Court Institute, clinical programs, internships and externships, Curriculum B, clerkships, study abroad programs, pro bono and service opportunities, and more.”

On Thursday, faculty and staff sponsored student tours of D.C. sites including the Library of Congress, the Newseum, the National Museum of African American History and Culture, and (a slightly more strenuous) jog on the National Mall.

For approximately 25 incoming first-year students who chose to visit Microsoft, participating in a simulated congressional hearing on the proposed regulation of online content may have seemed like an intense way to start law school. 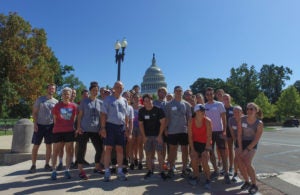 Professor Bob Thompson, Barb Moulton and Laura DeMouy take students on a jog on the Mall.

But as Associate Dean Paul Ohm explained, there were no grades on the performance — nothing would appear on a transcript. It was a fun opportunity to meet fellow first year students, a few professors, and even alumni — as they learned about Georgetown’s tech law program, which is now the largest in the country. And students even got to test some X-Boxes at the end of the visit.

“In my current job, we deal with important issues of information security and data privacy on a daily basis,” said Bill Jewell (L’23), a first-year evening student who works as an information security officer at a nonprofit. “This was a great opportunity to interact with a panel of phenomenal scholars, practitioners, and students who are interested in technology and privacy. The structured scenarios allowed us to get out of our current thinking for a couple of hours and try to advocate for positions that we likely wouldn’t be taking in our own lives.” 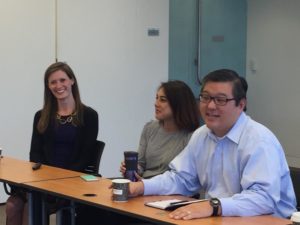 “There are so many fascinating questions about technology that are shaping all facets of society,” said Alexandra Givens, director of Georgetown Law’s Institute for Technology Law and Policy, who organized the visit along with Ohm, Tech Institute Associate Jeff Gary (L’18), and Professor Laura Moy, director of the Communications & Technology Law Clinic. “The idea of students being able to grapple with that on their second day of law school is really empowering…[students] can think about these big issues, and even at this early stage of their career, they can contribute to that conversation. So for us, it’s fun to put them in dialogue with each other and get them to engage on these questions. It is amazing, the level of sophistication of incoming Georgetown students, particularly on these issues that affect them and all of society so close to home.”

Georgetown Law — which now has 19 faculty members working in the tech space — has become a place where technology suffuses a lot of what we do, Ohm said. “We know that students are now coming to us eager to hit the ground running on these topics. So we thought, what better way to do that than to harness that [energy] during Orientation?”