Five justices sat at a long table, and four advocates each took a turn at presenting arguments in the case of "Roman Catholic Diocese of Gewirz v. Gordon." It was close to a real courtroom setup -- except for the fact that the “diocese” was named after the Georgetown Law student center, a pretty significant clue that this was a campus activity.

Every fall, Georgetown Law’s Barrister’s Council holds the Leahy Competition, in which upper-class J.D. and LL.M. students write briefs and present oral arguments, and the ones who perform best are invited to join the council’s Appellate Advocacy Moot Court Division, which participates in interscholastic competitions. Leahy is one of several Barrister’s Council competitions held every year for students interested in joining one of its teams.

Last month, in the Leahy Competition finals, Cesar Azrak (L’23), Corinne Cathcart (L‘23), Jewelle Vernon (L‘23) and Joey Meyer (L’23), having already written briefs and prevailed through three rounds of oral arguments, each had a chance to stand on the Hart Auditorium stage before a panel made up of real-life judges and appellate attorneys.

The case being argued was based on Roman Catholic Diocese of Albany v. Lacewell, a religious liberty case currently making its way through the courts that concerns employer-sponsored health insurance, state-mandated abortion coverage and religious entities.

Each advocate was given 12 minutes total speaking time, 2 minutes of which they were permitted to reserve for rebuttal (only one did so at this event). They were all well prepared with citations and examples to back up their arguments, but also had to work hard to keep moving through their remarks amid questions interjected by the judges.

“That was a great argument”

At the end of the oral arguments, the justices offered praise to all four competitors for their style and substance alike. 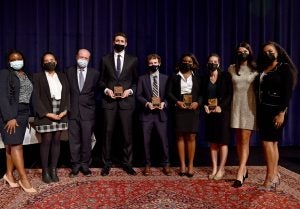 “If any of you were to stand up in my courtroom and make the argument like you made here… I would go back to my chambers and say to my law clerk, ‘That was a great argument. They did a great job.’ And that’s without practicing law yet! I was extraordinarily impressed,” said Moss, who has been a judge for seven years.

All four of the finalists are now eligible to join Georgetown Law’s Appellate Advocacy teams, as are nine others who performed well in the competition’s earlier rounds. Only one student could be named “Best Oralist,” however, and this year the honor went to Vernon, who represented the respondent in the case.

“Your demeanor was extraordinary,” said Katyal to Vernon.

“You had the most to work with, doctrinally, but you really mastered it,” added Pillard.

We spoke with Vernon after the competition to hear a little about how she had prepared to face the judges and what she hopes to do after graduation. 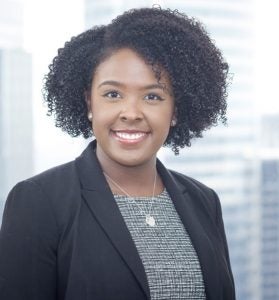 What does it take to make it to the finals of the Leahy Competition?

It’s a rough process, because it’s happening concurrently with school. I had two midterms and a group assignment due, and I’m one of the vice presidents of the Black Law Students Association, which has ten million programs happening.

First you write a brief, and you can pick either side, but I’m indecisive so I ended up writing two full briefs and didn’t make a final decision until the morning the briefs were due. But that was super helpful when I had to argue for the other side and I had already thought through those arguments.

For the oral arguments, I made so many different people practice with me — both people within the law and outside the law. There’s a real benefit to leaning on people outside the law school community. If they can’t understand your argument, it’s probably a sign that you’ve gotten a little too deep in the weeds.

How do you prepare to be interrupted by the judges’ questions?

I actually think it’s a little bit easier to respond to questions. My biggest fear is a cold bench, where no one interrupts you and you have to keep talking.

One of my closest friends practiced with me. He’s a teacher and knows nothing about the law. I would have him just stop me with any question, like “What’s the weather like in D.C. this week?” so I could practice answering a question and getting back on track.

How do you think being part of a moot court team will help you in your career as a lawyer?

I want to clerk after law school, so doing Barrister’s Council is good experience for applying for that. It seemed like it would be fun, but also I’d get to hone my writing and public speaking skills and get a really solid writing sample. I’ll be competing at the Federal Bar Association’s Thurgood Marshall Memorial Moot Court Competition in March, and I’ll be on the brief-scoring committee for Beaudry [the Law Center’s moot court competition for first-year law students], which I think will make me a stronger brief writer.

I’m not sure about my long-term plans, but short-term, I’ll be at Morgan Lewis this summer, working in labor and employment law. And I’m doing a practicum at the Supreme Court Institute next semester, writing bench memos for the people acting as judges. That will be a super cool experience. That’s one of the reasons I came to Georgetown — I liked that there were tons of opportunities for experiential learning. I wanted to go to a school where you can live the law and learn it at the same time.

Any advice for other students trying out for the moot court team?

Work on your “bluebooking” — that’s an essential skill. Don’t be afraid to lean on your community for support. And for ladies — wear heels! It’s the best way to keep yourself from shifting around a lot, because your feet are stuck in place.