In Memoriam: Judge Robert A. Katzmann

Judge Robert A. Katzmann, a federal appeals court judge who was a former Georgetown Law faculty member and former member of the Georgetown Law Board of Visitors, died June 9. He was 68. 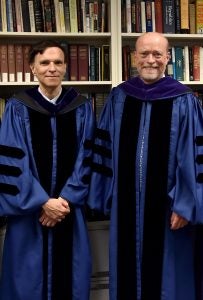 Judge Robert A. Katzmann with Dean Treanor during Dean Treanor’s Installation as the Paul Regis Dean Leadership Chair in 2019

“Judge Katzmann was a giant in the law, a brilliant scholar and a champion of justice.” said Georgetown Law Dean and Executive Vice President William M. Treanor. “Like many others, I also was fortunate to count him as a treasured friend. His passing is a tragic loss.”

Katzmann was appointed to the United States Court of Appeals for the Second Circuit by President Bill Clinton in 1999, and from 2013 to 2020 served as the court’s chief judge. Prior to his appointment, he was a fellow at the Brookings Institution from 1981 until 1999.

Before becoming a judge, he taught for more than a decade at Georgetown Law and Georgetown University, first as an adjunct professor and later as the Walsh Professor of Government. He was a tenured professor with the Georgetown Public Policy Institute from 1992 to 1999, and later played a formative role in the Institute’s transformation into the McCourt School of Public Policy, chairing its first dean search committee. While a judge, Katzmann’s continued commitment to Georgetown also included serving as a member of the Law Center’s Board of Visitors from 2005 to 2020.

Katzmann earned an A.B. from Columbia College, an A.M. and Ph.D. in Government from Harvard University, and a J.D. from Yale Law School. In his academic career, he distinguished himself as a leading expert in judicial-legislative relations, and was the first federal judge to hold a doctorate in political science along with a law degree.

“Judge Katzmann was a giant of an intellect and a beautiful, humble man,” said Professor Victoria Nourse, executive director of the Center on Congressional Studies at Georgetown Law. “He bridged the world of courts and academia effortlessly. I know of no other sitting judge who had his deep knowledge of Congress and his ability to convince judges of the importance of democratic processes.”

Katzmann was a lifelong educator with a passion for making the legal system more accessible to the public, including through the Second Circuit’s civic education initiative, “Justice For All: Courts and the Community,” a signature project of his judgeship. He also had a special interest throughout his career in immigrant rights, and part of his significant legacy is the organization Immigrant Justice Corps, which he helped found in 2014.

Delaney Family Professor of Public Interest Law Philip G. Schrag, whose scholarship focuses on immigration law and policy, said of Immigrant Justice Corps, “This immensely successful project has not only provided representation for tens of thousands of asylum seekers in the New York area and entry-level jobs for dozens of law school graduates who desired to become immigration lawyers, but has also served as a model for programs like it in other American cities.”

In addition to his teaching early in his career and his service on the Board of Visitors, Katzmann is remembered at Georgetown Law as a skilled jurist and caring mentor by the current members of the faculty who clerked for him over the years. Several of them recalled the lessons they learned from him.

“Judge Katzmann was a giant in the law, but he was also the best mentor anyone could hope for,” said Professor and Associate Dean for Careers Eloise Pasachoff. “He helped each of his law clerks discern our own individual career paths and opened doors for us at each step of the way. He was always ready to offer wise counsel or encouragement as complexities or roadblocks emerged. His day-to-day actions illustrated how to lead a meaningful life making legal institutions more inclusive and attentive to human need.”

Associate Professor Jonah Perlin praised Katzmann’s ability to listen deeply and to find compromise at every turn, and his tireless work in pursuit of justice. “He often told his clerks that while the law is not always kind or fair, one of his goals was to make sure that every interaction a person had with him and the legal system was one where they felt respected and heard,” Perlin said. “He taught me that there are always a few more hours in the day to help people, to do justice and to be righteous.”

Associate Professor Kevin Arlyck said he never before had met anyone as selfless as Katzmann, and doubted he ever would. “All judges are public servants in a sense, but Judge Katzmann truly lived to serve—from transformative initiatives like Immigrant Justice Corps, to the keep-the-trains-running responsibilities of being Chief Judge of the Second Circuit, to the individual kindnesses of giving clerks career advice,” Arlyck said.

Although Katzmann had left Georgetown more than two decades ago, his influence at the university is still felt today, according to Professor Anthony Clark Arend, chair of the Department of Government.

“Bob was a force of nature at Georgetown. A leader in the Government Department and the Law Center, he was the genius behind both the Bernstein Symposium and the Mullen Visiting Professorship,” Arend said.

These initiatives brought Supreme Court justices and members of Congress to campus and former solicitors general onto the Georgetown faculty – and Katzmann even remained active with the symposium once he joined the court. In October 2019, Katzmann returned to Georgetown Law to help lead and speak at Dean Treanor’s installation as the Paul Regis Dean Leadership Chair.

After stepping down as chief judge last August, Katzmann took senior status as a federal judge earlier this year and became a professor of practice at New York University School of Law, where he had already for several years taught as an adjunct professor and served on the advisory body of the Institute of Judicial Administration.

Katzmann is survived by his wife, Jennifer Callahan, and by an extended family of siblings, nieces and nephews.

You may also add your personal reflections of Judge Katzmann that will be included in a In Remembrance section below.

As someone who worked to expand access to counsel for immigrants after college, Judge Katzmann was a hero of mine long before I entered the legal profession. As many others have commented, Judge Katzmann dedicated significant time and energy to ensure that some of the most disadvantaged by our legal system had the opportunity to be represented in court. His work is the reason why tens of thousands of immigrants—in New York and beyond—are represented in their high-stakes proceedings before an immigration judge. Needless to say, I was ecstatic when the Judge offered me a clerkship with him in 2024. While the untimely loss of my hero and the inability to learn from him in chambers will be one of my greatest regrets, I am so thankful that Judge Katzmann touched my life. I will turn to his legacy as a public servant, and as an incredibly kind leader who had the ability to make everyone he encountered feel at ease, as an example to emulate as I begin my own legal career.

I met Bob through Judge Frank Coffin, for whom I clerked and with whom Bob maintained an important relationship. Bob and Judge Coffin shared a passion for good government and the rule of law. They formed the Governance Institute, devoted to improving understanding between Congress and the judiciary. Bob was incredibly kind and thoughtful in every encounter we had, whether social or professional. For a person of remarkable accomplishments, and a determined champion of justice, he was personally modest and eager to shift any praise of him to others. After he went on the Second Circuit, he maintained his affection and support for Georgetown.

Bob was one of those rare leaders who identified a major problem he experienced as a jurist and addressed it. He realized how broken the immigration removal adjudication system was, called out the need for competent counsel via the Marden Lecture at the NYC Bar Association in 2007, and ultimately led the way to the creation of the Immigrant Justice Corps (IJC) to train and develop a generation of excellent immigration and asylum law attorneys. A good number of CALS alumni who had represented an asylum seeker in our clinic at their immigration court hearing started their careers via this two year fellowship where they provided direct representation to immigrants in deportation proceedings at various advocacy organizations. In fact, one of our excellent CALS Fellows, Faiza Sayed, now a faculty member directing the immigration clinic at Brooklyn Law, served in the first IJC class. Bob was so committed to the IJC that he would meet with Georgetown Law students to encourage them to apply for the fellowship at our Human Rights Institute/OPICS events.

The loss of such a thoughtful, caring leader committed to social justice is great. For him, the importance of ensuring competent representation for asylum seekers and other immigrants was a civic duty as well as a personal one. His father was a refugee from Nazi persecution, and his mother was the child of Russian immigrants. The IJC statement mourning his loss remembers his passionate advocacy for poor immigrants: https://justicecorps.org/news/immigrant-justice-corps-mourns-the-loss-of-judge-robert-a-katzmann/

May his memory be a blessing.

Judge Katzmann combined brilliance, savvy, and kindness like no one else. I was fortunate to clerk for him from 2009-2010, and he became not only a boss and a mentor, but also a friend. That he was able to be the best of judges, an accomplished political scientist, a crusader for immigrant representation, and a mentor to countless young attorneys is truly remarkable. He always had time for everyone, and made everyone feel special. We lost him far too soon, but in his lifetime he made more of a positive mark on this world than most of us could hope to make.