Two justices on India’s Supreme Court joined two Georgetown Law professors and Dean William M. Treanor this month for a wide-ranging exploration of the role of the highest courts in the world’s largest democracies.

In a pair of hour-long discussions, Justices Uday Lalit and Indu Malhotra and Professors Neal Katyal and Lawrence Gostin explored the public’s right to health and the judiciary’s role as a check on the executive branch in India and the United States — pressing topics as the coronavirus continues its march across the globe and as a new conservative majority takes hold of the U.S. Supreme Court.

Launched as part of Georgetown Law Center’s 150th anniversary festivities, the two events kicked off a new annual Comparative Constitutional Law Conversations series sponsored by the Law Center and the Society for Democratic Rights, a group founded by Georgetown Law alumni that aims to strengthen democratic and civil rights in India.

Treanor, who served as moderator, called the series an “extraordinary opportunity” to learn about two of the most powerful Supreme Courts in the world.

A Check on the Executive

In the first session, “Keeping the Executive in Check: The Role of the Judiciary” on October 21, Justice Lalit and Professor Katyal examined how the Indian and U.S. Supreme Courts keep their respective executive branches in check, an issue that has dominated the political and legal discourse in the United States during the Trump administration.

Both courts are independent from other branches of government and can declare them in violation of the Constitution. But India’s court has a stronger power of judicial review, thanks to a landmark case affirming its ability to consider constitutional amendments – a decision Lalit called a “high mark” when it comes to the “liberties of the citizen.”

That power is more limited in the United States, said Katyal, who served as acting solicitor general in the Obama administration.

The U.S. Supreme Court, he explained, decided nearly a century ago to stay out of cases involving the review of constitutional amendments because they are a check against the judiciary. The U.S. court, he said, also tends to defer to other branches on matters of national security, as it did when it upheld the forced internment of Japanese Americans during World War II.

But Katyal said the court should go further to keep the executive branch in check in response to changing norms under the Trump administration. “The background assumption on which this very deferential judicial review practice has been made has been upended,” he said. “And so, yes, I think the Supreme Court now should be doing a lot more than it has before.”

The panel explored other differences between the courts, such as those relating to size and service. India’s court comprises nearly three dozen justices and hears more than 40,000 cases a year, while the nine-member U.S. court hears less than 100 cases a year.

And Indian justices must retire at 65, while U.S. justices are appointed to life terms, which often results in an uneven nominating process as well as what Katyal described as a “macabre spectacle” as courtwatchers monitor the justices’ health as they age. Term limits could mitigate these problems, he said, and packing the court, though in general a bad idea, may be “the only appropriate reaction” to intensifying politicization of the U.S. court, he said.

A ‘Fundamental Right’ to Health

India’s judicial system also has a “much greater tradition of protecting the common good,” Professor Gostin said in the second session on October 26: “The Right to Health and the Constitution.” 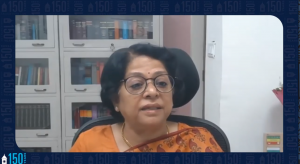 India’s Constitution, which is much younger than America’s, explicitly protects the right to life, which Justice Malhotra said encompasses people’s right to health and other basic necessities, such as food, water, and essential services. “We treat [health] as a fundamental right,” she said.

America’s older government and its so-called “negative” Constitution, on the other hand, emphasize restraints on government, a framework that Gostin said has led the U.S. Supreme Court to find in general – though with some exceptions – that the state does not have an affirmative or “positive” duty to protect public health and safety.

With conservative Justice Amy Coney Barrett now on the bench, the U.S. Supreme Court could swing further in that direction by, for example, allowing people to opt out of a COVID-19 vaccine for religious reasons. And it could deprive millions of Americans of health care insurance if it overturns the Affordable Care Act in entirety, which Gostin called a “nightmare scenario” — albeit an unlikely one. The court is slated to hear a case challenging the law’s constitutionality in November, a week after the U.S. elections.

“I have to say,” Treanor said at the conclusion of the series, “as somebody from the United States system, that we have much to learn from India.”

The Comparative Constitutional Law Conversations series is the brainchild of Vibha Datta Makhija (LLM ‘92), a senior advocate at India’s Supreme Court, and Madhavi Sunder, associate dean for International and Graduate Programs at Georgetown Law. It will feature in-person lectures in Washington, D.C., and in New Delhi in alternating years.

In addition to Society for Democratic Rights, the first two events were also cosponsored by three Georgetown Law partners: the Georgetown Center for Asian Law, the South Asian Law Students Association, and the O’Neill Institute for National & Global Health Law.

Thousands, including luminaries from the legal and health communities in India and the United States, tuned in to the virtual conversations.