“My Country Is Not My Limit”: Center for Transnational Legal Studies is Shaping Lives, Careers

Diana Khleif (LL.M.’14), who now teaches at Hebron University at Palestine, credits her career success to Georgetown Law and the Center for Transnational Legal Studies (CTLS), the London program she participated in during Spring 2013. Khleif participated in CTLS's 10th anniversary event in London on November 30, 2018. (Photos by Dolly Clew for CTLS/Georgetown Law.)

Diana Khleif (LL.M.’14) was studying law at Al-Quds University in Jerusalem when she joined the Center for Transnational Legal Studies (CTLS) in London in Spring 2013. CTLS was created by Georgetown Law and nine partner law schools around the globe to provide students and faculty with an international, comparative and transnational law experience unlike any other.

That proved true for Khleif who — following the death of her father, the one lawyer and role model who truly believed in her — was despairing that she could ever achieve her career goals.

Her semester on CTLS, she said, relit the spark, putting her back on track. 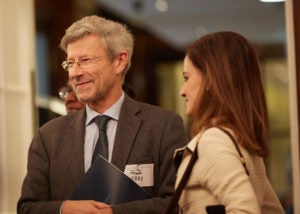 “As a Palestinian with many restrictions on movement and difficulties of having basic and fundamental rights, it was hard for me to even dream,” Khleif said at an event in London last fall celebrating CTLS. “But this is the place that taught me about investment in human beings as being the most successful investment out there. This is the place that taught me ‘my country is not my limit.’ And I saw myself going after my dreams.”

After CTLS, she became “unstoppable.” Khleif would go on to complete an LL.M. in International Legal Studies and International Arbitration/Dispute Resolution at Georgetown Law the following year. She would work for the World Bank and the United Nations High Commissioner for Refugees, among other things. Today, she is an advocate specializing in international arbitration and international refugees law.

Khleif also teaches law at Hebron University in Palestine, “where the right of education, especially for women, is not so easy to get,” she says. “When I heard one of my female students saying ‘she admires me, and hopes to be like me one day,’ it took me days of being in shock…I looked back and said, ‘I am who I am because of CTLS and Georgetown.’ I was taught how to value myself as a human being. I was taught that the best thing about me is the fact that I am a woman, a woman who can be one of those ‘big names.’”

An Experiment That Needed To Happen

CTLS celebrated its 10th anniversary in late November with a symposium that included Georgetown Law Dean William M. Treanor and former Dean T. Alexander Aleinikoff, who first envisioned the idea of a transnational legal center in London with partner schools around the world. Aleinikoff would later serve as the Deputy High Commissioner in the Office of the United Nations High Commissioner for Refugees in Geneva. 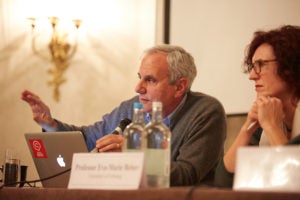 “CTLS was an experiment that needed to happen — to bring to Georgetown Law students new ways about thinking about the law in a globalizing world,” Aleinikoff says. “I am delighted that the project has survived and thrived.”

“CTLS has truly excelled at its mandate to address pressing transnational issues and problems of international law and governance,” Treanor says. “At a time when transnational agreements and coalitions are under threat from the rise of nationalism, CTLS…serve[s] as a beacon of purposeful transnational partnership and productive discourse.”

The November symposium covered two themes of transnational importance: 1) “New Challenges for Regional Economic Integration” (Brexit, NAFTA), chaired by Jo Murkens of the London School of Economics and questioning multilateralism in international economic and political relations; and 2) “Politics of National Assertion (Immigration, Asylum, and Human Rights Concerns), led by Aleinikoff and examining the rise of nationalism as a threat to human rights for immigrants. Sorbonne Professor Pierre Legrand delivered the keynote address. 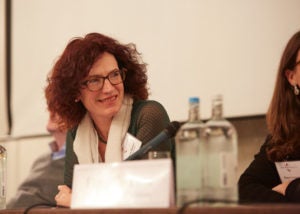 “CTLS offers a unique opportunity to help future lawyers better understand the functioning of law in today’s world,” says Georgetown Law Professor Franz Werro, a co-director of CTLS. Werro notes that even with a globalized economy and new technologies, cultural and legal diversity remains of paramount importance: “Transnational legal studies are, perhaps more than ever, a key instrument to help foster the proper legal mind.”

That was the experience of Aaron Davis (L’09), who came to Georgetown Law in 2006 wanting to be a patent attorney. Before law school, he was an electrical and computer engineer in Silicon Valley, designing computer chips. But globalization, he realized, was the future. So he opted to spend the fall semester of his 3L year in the first CTLS class, in Fall 2008.

Today, as a patent and intellectual property attorney based in the San Diego office of Knobbe Martens, Davis works with lawyers and inventors around the world resident in locations such as Japan, Ireland, Germany, England, Egypt, Istanbul, South Korea, Singapore and more.

“Even better than the legal concepts that I learned studying abroad” — he took World Trade Law and Transnational Legal Theory on CTLS — was the cultural interaction he gleaned from living and working with attorneys and law students from different cultures. 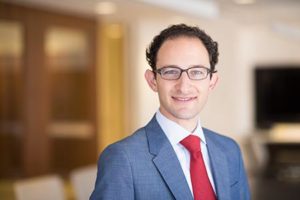 On the fun side, Davis remembers playing pickup soccer games with Londoners — “they were surprised that I knew how to play” — and a classmate from Brazil, as well as an election night party with CTLS classmates around the world when Barack Obama was elected president. From London, Davis worked to get tickets to the inauguration for when he returned to Washington, D.C.

“Working in Silicon Valley, I had also worked in industry with people from different backgrounds and countries and cultures,” he says. “But it was helpful to study with people [from around the world], get to know them, and learn a little bit more of their background, their ways of thinking.”

Elena Corcione, a 2011 CTLS alumna of the University of Turin who participated in the London symposium, describes the program as an amazing student experience that does not really end. “It does not matter whether you are struggling with your latest academic article or working in a law firm, there will always be that moment in which what you learned at CTLS will come up and give you a hint,” she says. “And notwithstanding exciting professional careers, wife, husband, children [later on], you will find your CTLS friends 10 years later — and understand nothing has changed.” 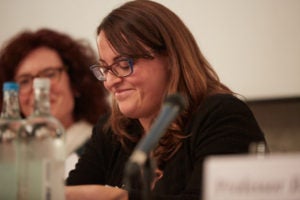 Other participants at the November event included Professor Eva Marie Belser of the University of Fribourg; Krista Nadakavukaren Schefer (L’98), vice director of the Swiss Institute of Comparative Law; Elena Corcione, a 2011 CTLS alumna of the University of Turin and a Research Fellow on Business and Human Rights at the Institute for International Legal Studies in Italy; and Avishai Azriel, Trade, Investment and Regulation Advisor at Permanent Mission of Israel to the OECD. Photos by Dolly Clew for CTLS/Georgetown Law; courtesy Aaron Davis.