Although Professor Amanda Levendowski was a college mock trial national champion in 2010, law school wasn’t always a given. An artist of sorts, she interned at independent publishing houses and was captivated by mash-ups, songs or videos created by layering elements of one work with another. It wasn’t until she came across Bridgeport Music v. Dimension Films (2005) a Sixth Circuit dispute about music sampling, that she realized that maybe the law was for her. 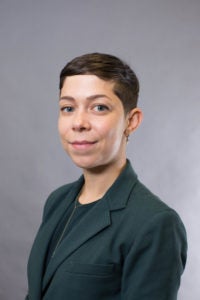 “I remember thinking, It’s weird that copyright law is having this effect on musical creativity, in a way that I don’t think copyright law really contemplated,” Levendowski recalled. “Are all my favorite songs illicit?”

As an undergraduate at New York University, she created an independent study program focused on copyright, publishing and technology. As a Georgetown Law professor and the founding director of the Intellectual Property and Information Policy Clinic, she plans to give students that same intellectual freedom to explore what interests them the most.

That self-directed study is key, she notes, in an area of law that is constantly evolving. For a paper on how copyright law can help mitigate the implicit bias of artificial intelligence (AI) by opening up new data sets to train AI algorithms under the fair use doctrine, Levendowski had to teach herself how artificial intelligence works. She examined how companies that train their AI using easily available or public data sets (such as images or texts with a Creative Commons license, or the court documents from the Enron trial) wind up reflecting, or even magnifying, the bias built into that data set. Shortly after her paper was published, IBM announced it had used Creative Commons data from the photo-sharing service Flickr to train a face-recognition data set.

“Even my own views continue to change after writing these articles because there are new developments that…help refine that perspective,” she added.

“It was so new that the court had to go to Wikipedia,” Levendowski recalled.

For law students, the swift-moving pace of technological developments means they should think creatively about what sorts of jobs might exist in the future, she said.

“When you’re working in technology law, what jobs are out there and what that policymaking looks like can really change dramatically just in a couple of years,” she said. “Your dream job might not exist yet.”

Fortunately, she said, Georgetown Law is an ideal place for students contemplating a career in technology law, citing other technology-focused clinics such as the Communications & Technology Law Clinic and the Federal Legislation Clinic.

“Georgetown is really focused on becoming a cutting-edge voice in technology,” said Levendowski.

How has studying technology changed her own habits when it comes to using everyday tools? Levendowski, who calls herself both a “tech skeptic” and a “very avid Twitter user,” says it’s important to be purposeful and smart.

“Technology isn’t neutral…I hope that students realize that technology has politics and they’re making choices,” she said. “But I want them to be informed about those choices…I want this to be something that they feel empowered to do.”