In the fall of 2009, Professor Jonah Perlin (L’12) was a 1L student in Georgetown Law’s Section 2, taking Legal Research and Writing with Professor Kristen Tiscione.

“Back then, I thought, ‘she has the best job,’” says Perlin of Tiscione. He freely admits, however, that as a J.D. student, he was actually terrified in Tiscione’s Legal Research and Writing class the first few weeks. 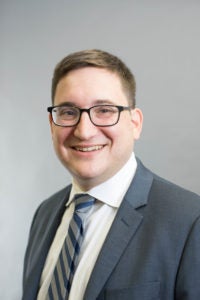 “As a colleague, she is the nicest, least intimidating person ever,” Perlin clarifies. “I was her law fellow the following year. But as a 1L, I was intimidated.”

Perlin grew up in Northern Virginia; his dad is a 1972 graduate of Georgetown’s School of Foreign Service, and he attended Hoya basketball games as a kid. So law school at Georgetown was an obvious choice. “It was hard to turn down the best school in D.C.,” he says. “I was interested in politics, and it was great to come home.”

The student who once contemplated getting a Ph.D. in religious studies now turned his focus to litigation — thanks in part to Tiscione. “Through her class, I got to see what a litigator does, what a case looks like…all things that I really had not thought about.”

After graduation, Perlin built a resume that a first-year law student might envy, including federal clerkships with Chief Judge Robert A. Katzmann of the U.S. Court of Appeals for the Second Circuit and Judge Ellen Segal Huvelle of the U.S. District Court for the District of Columbia; and a position at Williams & Connolly, where he specialized in complex civil litigation in the United States and abroad.

He loved practicing as a litigator, but the work didn’t compare to the spark he got while teaching. So while at Williams & Connolly, he taught advanced legal writing at Georgetown Law as an adjunct in the evenings, always telling Tiscione, “maybe someday, I will have your job.”

“She kept saying, ‘no, you’re not ready, you haven’t [practiced] long enough, you don’t have enough experience,” Perlin recalls. “It was the third or fourth time that I asked, over the course of nine years. I compare it to — my mom is a rabbi, and in Judaism, when you are converting, the rabbi is supposed to turn you away three times before you are allowed to convert. Professor Tiscione finally said, ‘okay, you’re ready; let’s talk about how you can make this happen.’ But she is the absolute best. Getting to work with her now is such a dream.”

The same holds true of the other members of the Georgetown Law faculty. “It’s a very interesting experience to become a colleague to people that you looked up to as your professors,” says Perlin, who will teach an advanced legal writing course and a law fellow seminar in addition to first-year legal practice. “We joke, our faculty literally wrote the book, [because many] have written a legal writing textbook. They are the experts, and they were pioneers in the field nationwide… I’m the new guy on the block, but they have been incredibly welcoming. It’s a great group.”