Professor Anupam Chander on Regulating — and Decolonizing — the Internet

From Twitter banning a sitting president, to Robinhood halting GameStop trades amidst the guerilla campaign to hike shares, recent events underscore the influence of what Professor Anupam Chander refers to as the “new gatekeepers.” 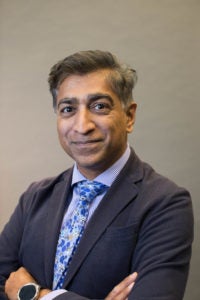 While many say these incidents show that internet companies are too powerful, Chander said that the issue is more complex during a Friday faculty conversation on “Technology and Democracy after the ‘Great Deplatforming.’”

New media companies have often been more democratic in their gatekeeping than traditional media companies, he said, giving rise to the great diversity of voices online. Chander thinks the platforms are often in a no-win situation: called too powerful when they act, irresponsible when they don’t.

We caught up with Chander, a leading scholar on the regulation and governance of internet companies on some of the top tech issues he’s following.

Given the events of January 6, what is Big Tech’s role in our democracy, and how do proposed antitrust reform and privacy laws fit in?

Internet platforms bear a share of responsibility for the circulation of misinformation that contributed to the insurrection, but we should keep in mind that politicians and cable news outlets should not escape blame. It’s hard to ensure accurate information about the world when our leaders are the ones spreading falsehoods, using popular TV news outlets to do so. I very much think we should have a strong and comprehensive national privacy law, but I’m not convinced that such a law would have prevented the insurrection. And I think that we should continue to scrutinize these companies for antitrust violations–but I’m unpersuaded that breaking up the companies would have improved our information environment.

It is certainly true that Twitter and YouTube have great power over our discourse, and making these companies smaller somehow would reduce that power. But it would also increase the shift of conversations to a Wild West of internet platforms, where there is less content moderation. Already, we are seeing a shift to services such as Telegram, which have almost no community guidelines that they enforce.

Twitter banned Donald Trump from its platform while he was still president of the United States. What is your take on this?

Twitter is a private company, and private companies can, and, I believe, should be able to decide what speech they will promote or refuse to promote on their premises. Earlier efforts to declare that spaces like Twitter are public forums where anything that is legal must be allowed have been rebuffed by the courts. Though we might think of them as public forums because they generally welcome all voices, they are not public forums for Constitutional purposes–because that would mean that they would generally have to permit all speech that is legal, even if it causes other harms.

Donald Trump repeatedly violated the community guidelines of these companies, but they didn’t enforce these guidelines, announcing exceptions for world leaders and candidates, permitting Trump to remain on the platform. But after the insurrection, the calculus changed. The companies faced an insurrection outside abetted by the President, and an insurrection inside from their employees, who didn’t want their work to be used to promote this kind of activity. With just two weeks left in the President’s term, the companies finally acted.

In your opinion, what is the most pressing issue when it comes to global technology law and regulation today?

It’s hard to pick just one! If I were forced to choose, the issue I would focus on is privacy. The United States, an early pioneer in privacy law and thinking, has ceded leadership on data privacy to the European Union. The United States must now establish a comprehensive federal privacy law that ensures that our data is secure and not used in inappropriate ways. From the get-go, the Biden Administration has to negotiate a mechanism to continue the flow of personal information from Europe to the United States, because the earlier mechanism has been ruled inadequate by the Court of Justice of the European Union. This is a critical issue not just for American companies, but for European companies as well. Congress may well have to act to ensure that foreigners have greater rights against American intelligence surveillance in order to renew the mechanism allowing data to flow across the Atlantic.

You recently gave a talk titled “Is the Internet a Western Idea? Decolonizing the Internet.” What inspired you to study that subject?

That paper grew out of a comment by Secretary of State Mike Pompeo. I read in the paper that Pompeo said that the U.S. would seek to maintain an internet with “Western values embedded in it.” And soon after that, Mark Zuckerberg said that he hoped that “A clear regulatory framework that comes out of Western democratic countries” should “become a standard around the world.”

This reminded me of old tropes about the civilized and uncivilized world. In fact, that framing is inaccurate–there are a lot of differences on how to regulate the internet within the West–and many of the internet’s values are in fact universal values. Seeing the internet as Western will lead to the exclusion of much of the world from the benefits and privileges of membership in your part of the internet. Companies in countries that come from the “uncivilized” parts of the world will be unable to participate in the global economy, worsening global inequality. The reality is that concerns about security, privacy, and expression on the internet are actually shared all over the world.

Your book, “The Electronic Silk Road: How the Web Binds the World in Commerce” argues that the internet is today’s version of the Silk Road. What do you mean by that?

What I wanted to do in writing my book was try to understand the internet as a means for transforming the nature of global trade. I saw the internet as a new kind of Silk Road, which connects, and in the process, remakes the world. Essentially, your smartphone is a trading post that allows you to access services across the world. It escapes traditional customs, visa, and border controls that earlier trade had to abide. The regulations around this relatively new mode of trade are uncertain. In the book I explore ways in which we can encourage global digital trade–increasing the access of the world’s poor to serve richer markets–while protecting consumers.

What would you say to students that are considering studying Technology Law at Georgetown?

Georgetown Law is the ideal place to study technology law and policy. We have amazing institutes and centers and faculty and students who are working on how to create more responsible technologies. Every day, the newspaper headlines are full of issues revolving around technology policy. And we don’t have great answers yet. We need this generation of law students to help us think through what the right approach is, and help us figure out a way forward.

Watch Professor Chander and other Georgetown Law technology experts for a wide-ranging discussion on technology, speech and regulation in a democratic society: