Professor James Forman Jr. on “Locking Up Our Own: Race, Class, and the Politics of Mass Incarceration”

“[The judge] says…‘Mr. Forman has been telling me that you have a tough life. … Well, son, let me tell you about tough. Let me tell you about Jim Crow segregation,’” Forman recalled. “He says … people marched, people fought, people died for your freedom. Dr. King died for you, and he didn’t die so you could be running and gunning and carrying on, embarrassing the family, embarrassing the community …. No, that was not his dream. I hope Mr. Forman is right and I hope you turn it around one day. But today, in this courtroom, actions have consequences. And your consequence is Oak Hill.” 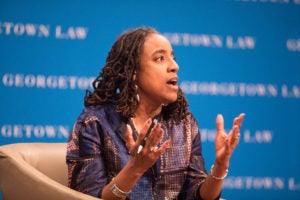 As Forman began to work through his anger, he realized that the city council that had passed the gun and drug laws that Brandon was being sentenced under was a majority African American city council.

“The police force was majority black, the police chief at the time was African American, the mayor was black. The chief prosecutor in the city was none other than Eric Holder. And even with all that representation in local government, that ability to control and influence some of the things that were happening in local law … we were doing the same thing in D.C. [that] the rest of the country was doing,” Forman said, noting that in the 1990s, one in three young black men nationwide was under criminal justice supervision (one in two in Washington, D.C.). “And so I began to ask myself the question, how did this happen, how did it come to be? What was so powerful, what was so all encompassing, what was so overwhelming in this country over the last 50 years that even in a majority black jurisdiction, we were making the same policy choices, passing the same laws, seeing the same results as the rest of the country?”

Locking Up Our Own

Forman began researching that question in what would become his book Locking Up Our Own: Crime and Punishment in Black America (Farrar, Straus and Giroux, April 2017), which won the 2018 Pulitzer Prize for General Nonfiction and was named one of the New York Times’s 10 Best Books of 2017. And on November 15 at Georgetown Law, Forman — who taught at the Law Center from 2003 to 2011 — delivered the 2018 Hart Lecture (video below) based on the book: “Locking Up Our Own: Race, Class, and the Politics of Mass Incarceration.”

Forman, the son of James Forman Sr. — the late executive director of the Student Nonviolent Coordinating Committee during the Civil Rights Movement — described growing up in Atlanta in a working class and middle class African American community. 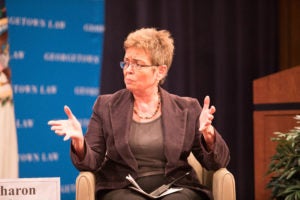 “I could see disparities in policing practices [from the time I was] a child,” Forman said. “Although I am mixed race and my parents raised me and my brother to consider ourselves African American, I’m so white that the police in my neighborhood didn’t always know it. I could see differences in how I was policed when I was by myself versus how I was policed when I was with my friends.”

And there was another thing he could see. “When I was a child, in my neighborhood … if you walked one way you got to the General Motors plant. If you walked the other way you got to the Atlanta federal penitentiary. When I’m graduating from law school, deciding what to do with my life, one of those buildings had closed. Doors locked, padlocked, jobs shipped overseas. The other building had built an addition …. I don’t think I need to tell you which was which.”

And so, after graduating from Yale Law, Forman decided to tackle the “unfinished business” of the criminal justice system. “Even though we didn’t have the term [mass incarceration], we had some of the underlying data. We knew already that one in three young black men was under criminal justice supervision …. We knew already that the United States had passed Russia and South Africa to earn the dishonor of being the world’s largest jailer. We knew already that we had 5 percent of the world’s population and yet 25 percent of its prisoners. And I had seen some of the policies, practices and transformations in American society that produced those numbers.”

The problem, he noted, stemmed from “rising crime and violence, and the fear and anger generated over the last 50 years … especially the 80s, the early 90s, the crack years, and heroin in the 1960s.” But it was the response the crime generated that would prove revelatory in writing the book. “[C]itizens wrote to their elected officials … mostly black citizens writing mostly to African American elected officials … and these letters reveal a kind of anguish. People say, we just fought the Civil Rights Movement, and I can’t take my kids to school because they are selling drugs on the corner and they are shooting in the park and I’m scared. … I feel like a prisoner in my own home. And [the letters] end with some version of, “Do something about it.” 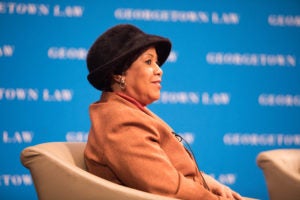 Though they wanted to seek justice for the crimes against them, elected officials were constrained by impoverished neighborhoods that were overreliant on the state, police, prosecutors and prisons for public safety. They asked Congress for money for education, for mental health services, for gun control — but got only money for law enforcement. It’s crucial, Forman said, that we look at “tiny small decisions made across 50 states … across 50 years … it’s these tiny decisions that are the individual bricks that make up the prison nation that the United States has become.”

What do we do about the problem now? Address it at the local level, get involved in local elections, he said. We need to break down barriers in education, and we need public defenders. “Some of you are being trained to do this now with [Professor] Abbe Smith (the director of Georgetown Law’s Criminal Defense and Prisoner Advocacy Clinic) and [Associate Dean] Kris Henning (the director of the Juvenile Justice Clinic),” he told the students. “Some of you won’t do this, but you’ll be citizens, you are going to vote. Start paying attention to the funding levels … ask, what’s your plan for increasing funding for public defenders.”

Following the lecture, Henning led Forman, former D.C. Mayor Sharon Pratt (the first African American woman to be mayor of a major U.S. city); and journalist/author Jonetta Rose Barras in a conversation about the mass incarceration of people of color — what happened to create the problem and what we can do to respond today.

“We needed to address the crisis that was engulfing the city … we should have been approaching it in a more holistic way,” said Pratt, who served as mayor from 1991 to 1995. “But the reality is … that it was a maelstrom in which our community was engulfed. There were people who had struggled to own homes, struggled to be a part of their community, who had the greatest aspirations for their children and grandchildren … and they couldn’t step out the door.”

Barras noted that her grandparents worked hard for her to thrive. “The sacrifice wasn’t just going to work, to a job … in some instances, people actually died to make our lives better, and ‘you have the nerve to actually commit a crime?’ … That was the message that we got from that generation … that whole history of sacrifice and struggle[.]”

Forman concluded the lecture: “I know that you will take down mass incarceration and you will replace it with a system that deserves to be called a criminal justice system. A system that protects communities while rehabilitating and restoring and overcoming and responding to harm. And when you do that … they are going to make a movie about it. And when it comes out, Professor Henning, Mayor Pratt, Ms. Barras and I, we will be in the front row, with popcorn, cheering you on.” 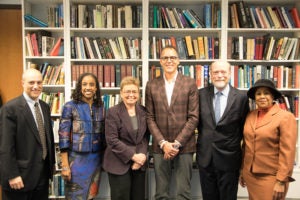 “Over the years, some truly remarkable scholars and public figures have given the Hart Lecture, [and] this year is certainly no exception …” said Associate Dean John Mikhail, who introduced Forman. “It’s a special pleasure for those of us who were fortunate to be his colleagues here at Georgetown, and have watched with admiration as James has become such an important voice in our national conversation around mass incarceration and racial justice.”

The Philip A. Hart Memorial Lecture was established at Georgetown Law in honor of the late Senator Philip Hart (C’34, H’70) to promote dialogue on topics that were of special interest to Senator Hart, such as human rights.