As one of the first legal clinics of its kind, the Georgetown Law Juvenile Justice Clinic continues to be one of the premier law school clinics in the country. 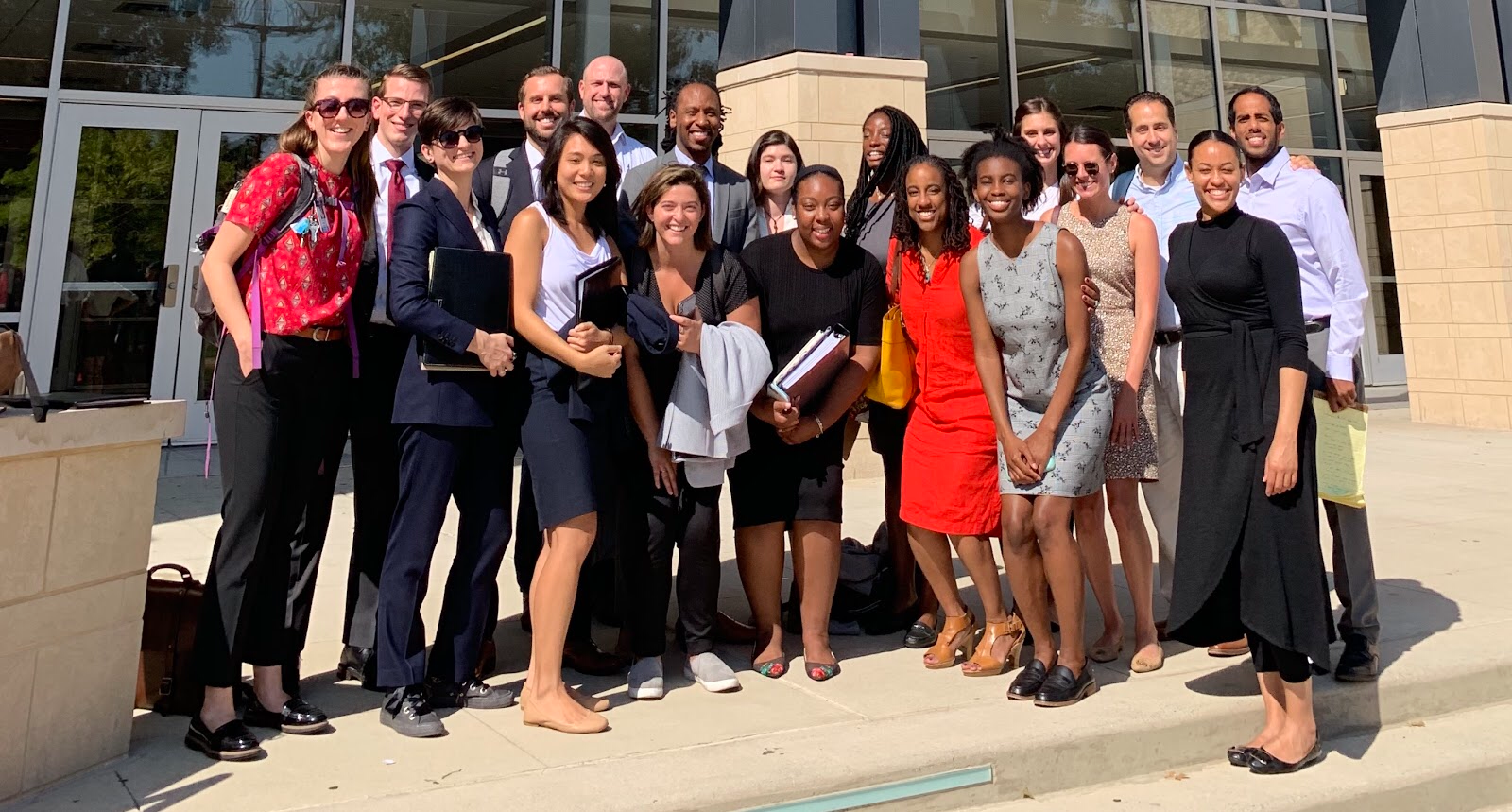 The Juvenile Justice Clinic was founded in 1973, a mere six years after the Supreme Court extended the right to counsel and procedural due process to children in its landmark case In re Gault.

One of the first law school-based clinics specializing in children’s issues, the Juvenile Justice Clinic sought to fulfill the mandate of the Gault decision, expand the legal rights of children and ensure that children are protected from maltreatment by their parents or the government.

In its early years, the Clinic handled all types of cases involving children, delinquency, education, and child neglect and abuse among others, and helped to formulate policy at the local and national levels. Over time, the Clinic’s focus narrowed to handling only delinquency cases and education cases.

In 2015, the faculty of the Juvenile Justice Clinic expanded the reach of the Clinic by establishing the Georgetown Law Juvenile Justice Initiative. The Initiative is designed to explore and advance new policies and programs to assist young people and to train juvenile defenders across the nation as the Clinic continues its core mission of educating law students and representing youth accused of crime. Operating at the National, Regional, and Local level with a primary focus on Racial Justice, the mission of the Juvenile Justice Initiative is to advocate for a smaller, better, and more just juvenile legal system in the District of Columbia, the Mid-Atlantic region, and across the country.

"Cops at the Schoolyard Gate:" Read an excerpt from The Rage of Innocence by Kristin Henning

In "Cops at the Schoolyard Gate," published by Vox, Georgetown Juvenile Justice Clinic & Initiative Director Kristin Henning examines how the number of police officers in schools skyrocketed in recent decades and made for a harrowing education for Black and brown youth. Read this excerpt from The Rage of Innocence by Kristin Henning and pre-order the book at the link below. 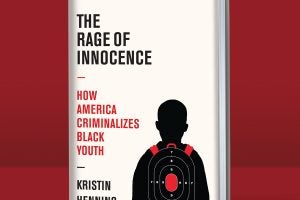 The Rage of Innocence: How America Criminalizes Black Youth 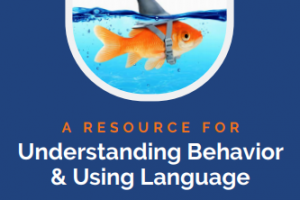 Seeing What’s Underneath: A Resource for Understanding Behavior & Using Language in Juvenile Court

The Georgetown Law Juvenile Justice Clinic & Initiative is pleased to announce the release of Seeing What’s Underneath: A Resource for Understanding Behavior & Using Language in Juvenile Court, developed in partnership with the National Juvenile Defender Center, the National Council of Juvenile and Family Court Judges, and Fair and Just Prosecution. 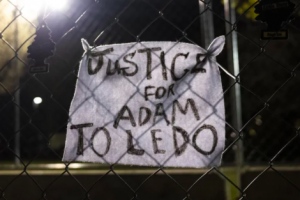 Op-ed by Director Kristin Henning: "Police Have Killed at Least 5 Children in the Last Month Alone. When Will It Stop?" at Slate

"[T]he persistent examples of police killing Black and brown children raises the question: Who is entitled to the grace of childhood? [...] No doubt, the police want us to slow down, resist snap judgments, and evaluate this shooting independently of all the others. But this is exactly what the police should be doing every time they each encounter a child." 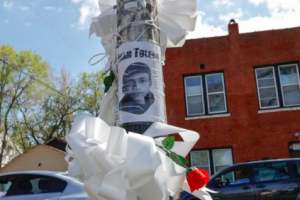 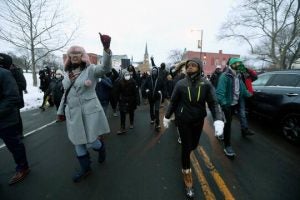 “Black children have never been given their opportunity to be children,” said Kristin Henning, law professor and director of the Juvenile Justice Clinic and Initiative at Georgetown Law.

Read more from Prof. Henning in this Washington Post article bout how the story of police pepper spraying a 9-year-old Black girl in Rochester, NY reflects how Black children are policed throughout the country. 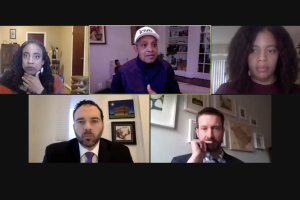 Days after a video of police pepper spraying and handcuffing a 9-year-old Black girl went viral, Blume Professor of Law Kristin Henning posed a fundamental question: “How do we cultivate a society in which we treat all kids like kids?”

Read more and watch a recording of the event. 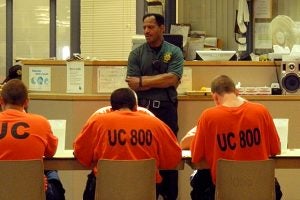 Read The Imprint's coverage of the Georgetown Juvenile Justice Clinic & Initiative's event The Dehumanization of Children of Color: Rethinking Policing and Policy. Dr. Phillip Atiba Goff, one of the nation’s preeminent scientists on race and policing, and Prof. Kristin Henning had a public discussion on the research and reality of racial bias in policing youth. Their discussion was followed by a panel of local and national youth justice experts.

Jennifer Ubiera testifies in support of reimagining public safety by reducing police contacts with the community and investing in community infrastructure.

Jennifer Ubiera testified to the DC Council Committee on the Judiciary and Public Safety's Alternatives to Policing Roundtable in support of reimagining public safety by reducing police contacts with the community and investing in community infrastructure.

Eduardo Ferrer testifies in support of youth-specific police reforms to reduce the over-policing of Black youth in D.C.

Eduardo Ferrer testified at the Council of the District of Columbia's Committee on the Judiciary & Public Safety public hearing today, advocating for police reforms that protect the specific vulnerabilities of youth and end the over-policing of Black youth. Read his testimony calling for access to counsel at interrogation for all youth, ending the practice of "consent" searches for youth under 18, and eliminate funding for school safety from the Metropolitan Police Department budget and instead reinvest it in implementing a more holistic approach to school safety and youth development.

Eduardo Ferrer testified in support of a true reimagining of school safety, focusing on a holistic, public health approach that is relational, restorative, racially just, and trauma-informed at the DC Council Committee of the Whole & Committee on Education Public Roundtable on School Security in the District of Columbia Public Schools. Read his full testimony, including the harms caused by the over-policing of youth in schools and his recommendations that outline key principles that should guide the process for reimagining safety in DC schools. 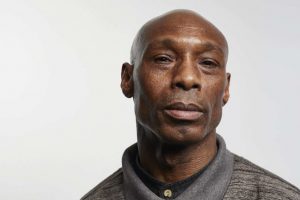 NPR's Hidden Brain podcast featured JJC Director Kristin Henning in its latest gripping episode, "The Night That Lasted A Lifetime: How Psychology Was Misused In Teen's Murder Case." Listen to Professor Henning on the podcast here (starting at 34:00). 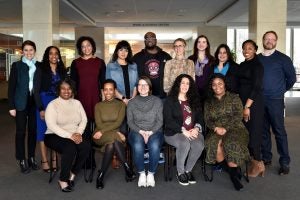 In a fitting way to honor and carry on Dr. Martin Luther King Jr.’s life work, 10 juvenile defenders from across the country recently gathered at Georgetown Law over a chilly MLK holiday weekend. Together, the geographically and racially diverse group marked the start of their yearlong service as “Ambassadors for Racial Justice.” They are part of a pilot program, sponsored by Georgetown Law’s Juvenile Justice Initiative and the National Juvenile Defender Center (NJDC), that seeks to bring racial justice concerns to the forefront of juvenile justice advocacy and empower advocates to develop innovative ways to challenge systemic inequities. 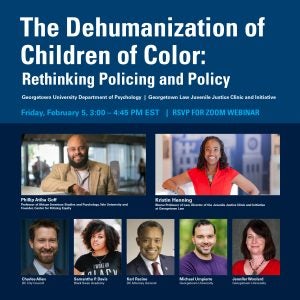 3:00 PM The Dehumanization of Children of Color: Rethinking Policing and Policy

The Georgetown Juvenile Justice Clinic & Initiative and the Georgetown Department of Psychology hosted nearly 1,000 students, lawyers, psychologists, juvenile justice officials, advocates and others who had virtually tuned in to hear Prof. Kristin Henning and Dr. Phillip Atiba Goff, preeminent researcher on racial bias and policing, discuss the psychology behind the racially disparate policing of children of color.

Read more about the event and watch a recording. 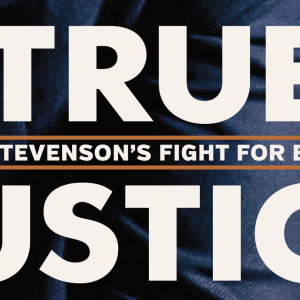 The Georgetown Juvenile Justice Clinic in partnership with Restorative DC, Georgetown Black Law Students Association, Georgetown Law Campus Ministry, Georgetown Defenders, Georgetown Youth Advocates and the Office of Equity and Inclusion invite you to join us on Tuesday, February 11, 2020 for a screening of Bryan Stevenson's HBO documentary, True Justice. The screening will begin at 5:30PM followed by a post-documentary dialogue.

In response to the emerging outbreak of coronavirus (COVID-19), the Juvenile Justice Clinic & Initiative is committed to providing resources to ensure the health and safety of our local community