“Today, I want to talk about where most of us live,” said Georgetown Law Professor Sheila R. Foster, following her installation as the Scott K. Ginsburg Professor of Urban Law & Policy on October 2. Foster began her address, entitled “Who Owns the City,” by noting that today, 83 percent of Americans live in urban metropolitan areas, with 90 percent projected by 2050. “The world follows the rest of this pattern.”

Why do these growth patterns matter? “Simply put, cities and their metropolitan areas have become the economic engines of our country and are at the heart of problems of economic and spatial inequality — and arguably, solutions to this inequality,” Foster said, noting that the top 10 largest metropolitan regions generate 34 percent of the country’s GDP. 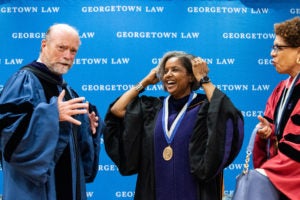 People move to the cities for reasons including opportunities, higher salaries, and interactions with the “creative class,” including workers in business, law, arts, technology and more. But “the most prosperous and economically productive U.S. cities and metropolitan regions have become exclusionary…” she said. “In top metro areas, the average value is one million dollars per acre.”

The exclusionary nature of our cities is aggravated by the temptation of local governments to commodify and sell land to the highest bidders, she noted. And in her investiture address, she explored the concept of vacant land. “Does the public nature…impose different and distinct rights and obligations…? Do members of the public have any claim on this land once it becomes public? Can public property rights be recognized as a distinct property relationship—and if so, how are they to be distinguished?”

One view is that when a private owner abandons this land, it reverts back to the commons, belonging to the people, Foster said. The idea that this land is a commons “has resonance,” but there need to be rules and governance norms when we share property. Citing several examples, Foster argued that governance allows for sharing. “I’m not suggesting that all public property should be governance property or stewarded collectively,” she said, adding that no one system of land ownership or management is perfect. “But these experiments in collective public land management…should include procedures…to [protect] the most vulnerable stakeholders and establish clear public boundaries and norms… What’s exciting about innovations such as land trusts are that they are a way of sharing our collective resource of the city with those who lack sufficient resources to survive and flourish.”

Foster, who has a joint appointment with Georgetown University’s McCourt School of Public Policy, writes in the area of Property, Land Use, Environmental Justice and Local Government Law. Her most recent work explores questions of urban law and governance through the lens of the “commons,” exemplified by her article “The City as a Commons,” in Yale Law and Policy Review (2016) and her forthcoming MIT Press Book, The Co-City.

Professor Sheryll Cashin, the Carmack Waterhouse Professor of Law, Civil Rights and Social Justice at Georgetown Law, noted that Foster did not initially plan to be an academic. But during more than two decades teaching at Rutgers and Fordham law schools, and now Georgetown Law, she began to reimagine what cities should be, including civil rights and environmental justice in the vision.

“[Professor Foster] thought the issues raised by environmental concerns have a lot more to do with larger issues of how we structure cities and segregate them,” Cashin said, noting that Foster also travels to cities worldwide in her work. “Internationally and domestically, she perceived a classic issue of the commons and the tragedies associated with it, and she began writing about it…questions of how to govern when you have collective common resources and competing demands…grappling with issues of poverty, whether in the global South or in New York City, and the problem of cities selling and commodifying public space.”

Dean William M. Treanor remarked that he once awarded Foster a chair when he was dean at Fordham Law, and she was a professor there. “Sheila is honored today for her pioneering work on the subject of environmental justice, for her influential scholarship focusing on cities and urban development, for being a trailblazing scholar in comparative antidiscrimination law, and for truly embodying an interdisciplinary approach to studying the world’s most pressing problems,” the dean said.

The Ginsburg Professorships were made possible through the generosity of Scott K. Ginsburg (L’78). Ginsburg’s recent $10.5 million gift, the largest single gift in Georgetown Law history, will allow the school to expand its Washington, D.C., campus and will also support talented faculty members. Foster is the third Scott K. Ginsburg Professor to be installed in 2019, following Professor Rosa Brooks in March and Professor Carlos Vazquez in September. “[Scott’s] generosity knows no bounds,” Foster said.