When Supreme Court Justice Ruth Bader Ginsburg launched Georgetown Law’s inaugural Ruth Bader Ginsburg Lecture Series in April 2018, some feared that next year's lecturer — or lecturers — would have a tough act to follow. They needn’t have worried. This year was even better. 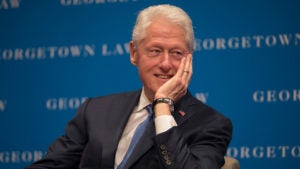 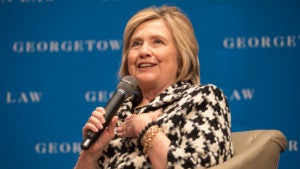 “I’m often asked, as dean, what’s my favorite memory — and it’s what we just saw,” Treanor observed, just after the standing ovation. “Walking into this room with Justice Ginsburg, and seeing our students look up with such admiration and inspiration for somebody who is one of the great figures in the history of the world, and also a cultural icon.”

Treanor noted that the justice’s late husband, Professor Marty Ginsburg, was a beloved member of the Georgetown Law faculty until his death in 2010.

The lecture series, Treanor said, honors distinguished leaders who champion equality and human rights. “Normally when I introduce an event, I talk about the biographies of the speakers,” he said. “That’s pretty unnecessary.”

The guests returned the compliment. “Let me say how delighted I am to be here with all of you at this law school that has such a great place not just in the nation’s capital but in our country and the world,” Secretary Hillary Rodham Clinton said. “And to be here with Justice Ginsburg.” 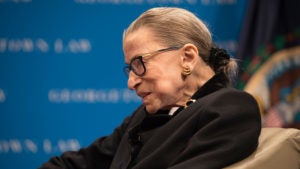 The event began with a lighthearted look at the 86-year-old justice’s workout regimen, as described by her trainer, Bryant Johnson, in his book The RBG Workout. Secretary Clinton bought five copies and gave one to President Clinton. “He is very proud of having nominated her — but he is going to let her do the workout,” Secretary Clinton said.

Bill Clinton, who served as the 42nd U.S. president from 1993 to 2001, nominated Ginsburg to the Supreme Court in June 1993 upon the retirement of Justice Byron White. “After [I talked to her] about ten minutes, I knew I was going to ask her to do the job…” President Clinton said.

The Clintons noted the justice’s role as a champion for women’s rights; as a lawyer for the ACLU, Justice Ginsburg argued six significant cases on gender equality before the Supreme Court, and won five. As a justice, her writing continues to resonate.

Have President Clinton’s expectations been met with respect to his Supreme Court nominee? “They’ve been wildly exceeded…” he said. “If you read any of her opinions, you’ll see exactly what I sensed in that interview; she’s just completely on the level: ‘These are the facts as I understand them, this is the law as I understand it, these are the consequences of this, and I come out here’… That was a good day’s work I did.”

Ginsburg recalled that when she was 60, some people thought she was too old to serve on the Supreme Court. She’s now in her 27th year, one of the longest tenured justices. “If you worried about my age,” she said to applause, “it was unnecessary.” 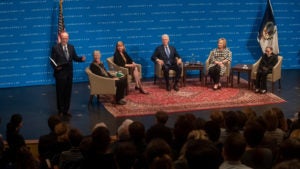 Advice to law students? “It’s an interdependent world no matter how you cut it,” President Clinton said. “The question is whether we are going to live on terms of positive interdependence and inclusive societies, with inclusive relationships with others, or negative interdependence, where we negotiate every last little thing in a zero-sum environment, where in order to feel like we’ve won, we have to say you’ve lost… [Studies show that] diverse groups with the ability to think and speak and act freely make better decisions than homogenous groups among geniuses. Over the long run, authoritarianism doesn’t work very much. The thing you can do to make that most credible to people living in other countries is to make our own democracy work.”

Hillary Rodham Clinton noted that students are in law school “at an extraordinarily important time in our country, because many of the issues that are being fought out in the courts, in politics, are going to need voices… I am worried that there is a sense that [the current political climate] is the way it always has been, and it hasn’t…those of you here at this very excellent law school are going to have a role to play, whatever you decide to do with your law degree…you are now a well-trained citizen.”

Advice for those interested in politics? “Get involved,” Secretary Clinton said, “and make it less toxic.”

The greatest legal or legislative victory of the three guests? “That’s like asking which of my grandchildren is dearest to me,” Ginsburg said. While many cases stand out, she cited her historic 1996 Supreme Court opinion that allowed women to enter the Virginia Military Institute, and the Lilly Ledbetter equal pay case.

Secretary Clinton cited her work on the Children’s Health Insurance Program and her work as a senator representing New York after the events of September 11, 2001. President Clinton cited a number of victories including Ireland, the Balkans, the Family and Medical Leave Act, the Violence Against Women Act and “reversing Reaganomics,” with his 1993 economic plan — which he said had, by far, the biggest effect on the biggest number of people.

But perhaps the most significant question of the night came from student Madeline Bardi (L’20) — who asked just in time for the historic World Series, “are you rooting for the Washington Nationals?”

“I’ve loved baseball since I was a little boy…” the former president said. “Houston is a magnificent team…but I want the Nationals to win, because we haven’t won in so long.”