Law and Disinformation in the Digital Age

Disinformation has burst onto the world stage as a significant factor in international politics. Although lies, deception, and perfidy are ages-old phenomena, the digital age has facilitated the amplification and manipulation of false information to an unprecedented extent. Disinformation, broadly defined as false information intended to mislead, emanates from both states and non-state actors and affects communities across the globe.

Read the collection of essays.

View a video of the Disinformation Panel with experts.

This project culminated in a multipart presentation, including the student panel linked below:

Governing in the Digital Age: A Survey of State Responsibilities to the Private Citizen in Cyberspace

The continuously emerging technological advances of the twenty-first century have fundamentally shifted societal perceptions of an individual’s: access to information, protection of personal data, and level of digital security. As a result, communication and exchange between individuals, third-party entities, and governments requires a reconfiguration of “social governance contracts” across the globe. This paper ­– prepared by the Georgetown University Law Center Global Law Scholars program – attempts to capture the current state of this digital governance. It surveys state responsibilities to the private citizen from the perspectives of international law, regional frameworks, and the law of select individual states. It concludes by offerings several substantive recommendations.

Based on a broad analysis of cyber activity governance – with an emphasis on privacy protection – in international law, regional bodies, and numerous individual states, the authors make substantive recommendations to: define a global minimum standard to individual rights to information (to be led by UN Member States); promote routine review of regional treaties such as the GDPR; facilitate expert meetings and task forces to address potential gaps created by emerging technologies; minimum obligations standard for governments and relevant third party actors. 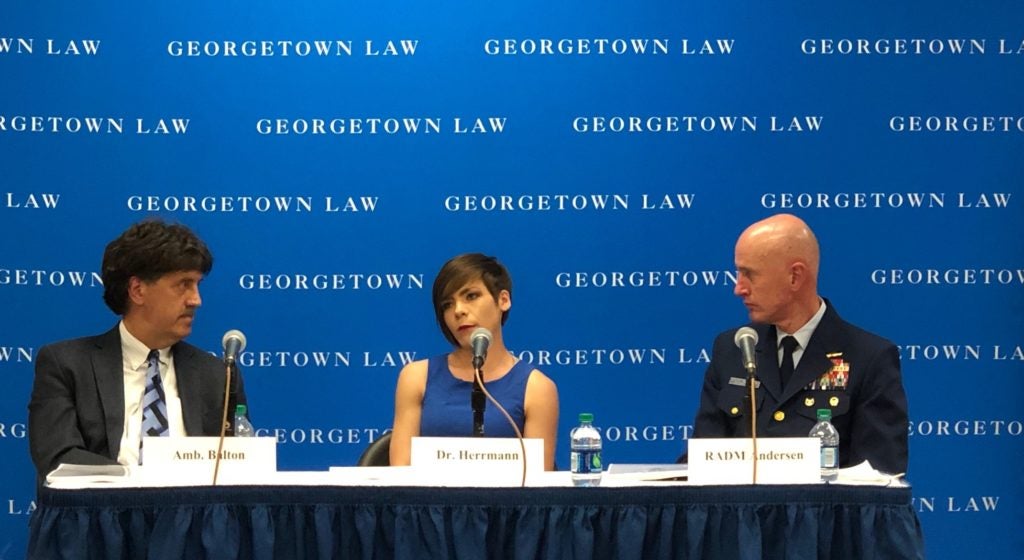 In spring 2019, the GLS Class of 2020 hosted a distinguished panel on the law and policy implications of a melting Arctic. The panel featured Rear Admiral Andersen, the Judge Advocate General of the Coast Guard; Ambassador David Balton of the Wilson Center and formerly of the State Department; and Dr. Victoria Herrmann of the Arctic Institute.

The panel served as a capstone to the GLS Class of 2020’s 200-page report, Arctic Summer: Law & Policy Implications of a Melting Arctic, which covers environmental law, international organizations, economics and trade law, and national security law in the context of the evolving Arctic. View a flyer of the event.

View a video of our 2018 event, Foreign Electoral Interference and International Law, which was held on March 7, 2018. It was the capstone event for the GLS 2L’s year-long research project on the history and methods of foreign electoral intervention.

The Arms Race in Space

The Global Law Scholars and the Center on National Security and the Law held an event with renowned non-proliferation expert Ambassador Thomas Graham, Jr. He was be joined by Professor David Koplow, a friend and former colleague, for an informal interview on the past, present, and future of arms control. Following their discussion, Ambassador Graham and Professor Koplow responded to student questions. 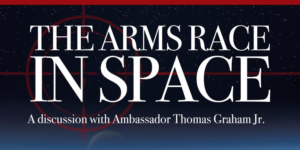 Ambassador Graham, was involved in every major arms-control and nonproliferation agreement between 1970 and 1997, and worked under six consecutive U.S. Presidents, beginning with Richard Nixon. Graham headed the U.S. delegation to permanently extend the Non-Proliferation Treaty, lectures at top law schools around the country, and has authored numerous books and articles on non-proliferation. He is currently Executive Chairman of Lightbridge Ltd., which develops proliferation resistant fuel technology and provides advisory services for existing and emerging nuclear programs. He also serves on the United Arab Emirates International Advisory Board.

Professor Koplow, an expert in arms control in his own right, has held various positions at the Department of Defense, including Special Counsel for Arms Control to the General Counsel, Deputy General Counsel for International Affairs, and Attorney-Advisor and Special Assistant to the Director of the U.S. Arms Control and Disarmament Agency. Professor Koplow teaches on International Law, Arms Control, and Non-Proliferation and Terrorism at Georgetown Law. He has written extensively on arms control and the law of war.

In an effort to understand the potential of securities law as a means of promoting socially responsible sourcing by companies, the Global Law Scholars Class of 2016 reviewed the disclosures of all 1,001 issuers obligated to file a report on Conflict Minerals in their supply chain with the U.S. Securities and Exchange Commission (SEC) in 2013.

Based on consultation with issuers, law firms, and responsible minerals sourcing advocates, indicators were developed to assess whether companies were following (1) the letter of the Dodd Frank Act’s Conflict Mineral Rule, by reporting on their due diligence and facilities used for processing tin, tantalum, tungsten, and gold in their supply chain; as well as (2) the spirit of the Rule, by committing to develop a conflict minerals policy, updating contractual conditions with their suppliers, or engaging in other efforts to clean up their supply chains.

While about one-third of the companies met all measured letter of the law requirements, only four percent scored perfectly on our measured spirit of the law indicators. Factors that correlated with stronger letter and spirit of the law scores for companies include internet visibility, financial health, industry location, participation in the Conflict-Free Sourcing Initiative, and funding from socially responsible investors.