While we are unable to welcome visitors inside Law Center buildings at this time, you can still learn more about the history and layout of the Georgetown Law campus!

The History of Georgetown Law

In the fall of 1870, with high expectations and tenuous financial structure, Georgetown’s law school enrolled 25 students from 12 states and Cuba. The course of study required two years of evening classes. Though the law school weathered heavy financial storms and other worrisome problems common to new schools, the vision of its early leaders, the reputation of the law school’s faculty members, and the record of the school’s first graduates enhanced the school’s reputation. In 1890, construction began on a new law school building at 506 E Street, N.W., which had the remarkable capacity of 600 students. 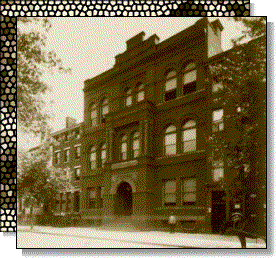 After 80 years in its Victorian quarters on E Street, the Law Center moved to 600 New Jersey Avenue and the original Bernard P. McDonough Hall. The Edward Bennett Williams Law Library was built in 1989. The 1993 dedication of the Bernard S. and Sarah M. Gewirz Student Center added a residential component to the campus, as well as a fitness center and child care center. The expansion of McDonough Hall, dedicated in the spring of 1997, completes the three building Law Center campus.

While once a rudimentary handful of courses embracing the barest fundamentals of legal practice, the curriculum is now as broad and diverse as any offered in the country with over 400 courses and seminars. It includes the nation’s largest clinical program, as well as joint degree programs in law, business, foreign service (international relations), public health, philosophy, government, and a special program for Public Interest Law Scholars. Although the approximately 80 percent of the students study full-time for their J.D. degree, the Law Center has retained the historical evening division with its outstanding reputation for the academic strength of its students and curriculum.