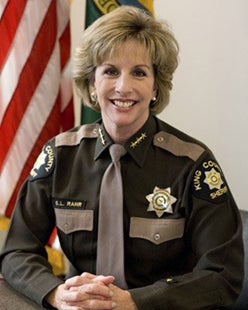 Sue Rahr began her 41 year law enforcement career as a deputy with the King County Sheriff’s Office in 1979 and worked her way up through the ranks until she was elected Sheriff in 2005. She served as Sheriff for another seven years, retiring in 2012. She was responsible for over 1,000 employees, a $150 million budget, and contract police services in 12 cities and transit policing for the Seattle/Puget Sound region. She led KCSO to CALEA National Accreditation in 2010 and was awarded “2010 Elected Official of the Year” by the Municipal League. In 2012 she was appointed Executive Director of the Washington State Criminal Justice Training Commission where she has served for nine years and was responsible for training all city and county law enforcement and corrections officers in the state, as well as many other criminal justice professionals.

She served as a member of the “Executive Session on Policing” at the Harvard Kennedy School from 2011-2014; served on the “President’s Task Force on 21st Century Policing” in 2015; serves in an advisory capacity with numerous national police reform organizations, including the Council on Criminal Justice, Law Enforcement Action Partnership, and Law Enforcement Leaders to Reduce Crime and Incarceration.

She has served on many non-profit community and professional boards and held the following offices:

She is married to a retired high school teacher, has two adult sons and two grandchildren.