Georgetown Law’s annual Teaching and Scholarship Luncheon on April 18 honored the full-time and adjunct Law Center faculty who are making an impact in teaching, writing, representing clients and above all, making a difference in the lives of their students.

“We celebrate our past year — extraordinary teaching, great scholarship and service by members of this community,” said Dean William M. Treanor, who introduced the event.

Associate Dean John Mikhail presented just some of the highlights of the scholarship produced at Georgetown during 2018-2019: 46 books, 168 scholarly articles and essays, 48 book chapters, 40 Supreme Court briefs, a variety of revised casebooks, and countless pieces of advocacy in magazines, newspapers, blogs and more.

Associate Dean Paul Ohm presented the Charles Fahy Distinguished Adjunct Professor Awards. “At Georgetown, we literally have almost 700 lawyers giving their time, their energy, their commitment, their wisdom to our students, and we could not pull off the size, complexity, and richness of what we do here without these amazing people,” Ohm said. 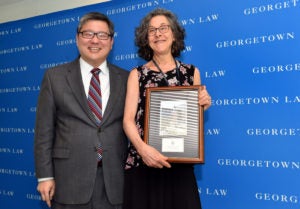 Ohm presented the Fahy Award for the J.D. program to Adjunct Professor Dori Bernstein (LL.M.’89), who directs Georgetown Law’s Supreme Court Institute. Bernstein runs the Institute’s moot court program — in which advocates moot their oral arguments at Georgetown Law, with a panel of experts acting as justices, before arguing at the Supreme Court. Bernstein also teaches a Supreme Court Judicial Clerkship practicum class in which students act as law clerks for the volunteer “justices.”

“Dori really is a teacher — not only to the students who nominated and advocated for her to win this award, but it’s fair to say to the entire Supreme Court bar of Washington, D.C.,” Ohm said. “Dori really is the beating heart of the Supreme Court Institute, which is really the crown jewel of what we do here.” 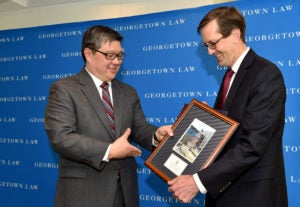 “It is so exciting and rewarding, as all of you know, to watch your students go to work at high-level government positions, companies like Microsoft and Google and law firms all over the world…” Brightbill said. “When I came out of law school at Georgetown Law, NAFTA was brand new, and the World Trade Organization was just being formed. Today, news about trade policy and trade litigation makes front page headlines all around the world.”

“If you saw a word cloud of the words in [Professor Super’s] nominations, you would see ‘generous’ and ‘caring’ in very large font — that’s what David is all about,” Langevoort said. “You would also see endless variations on the word ‘Super’ over and over. David also works tirelessly as a teacher…the nominations, the course evaluations, broadcast that very loudly.”

For the first time, the Steven Goldberg Faculty Service Award was presented — this year, to Professor Steven H. Goldblatt (L’70) (who noted how his similar-sounding name continues to be linked to Goldberg, his distinguished late colleague). Goldblatt, a co-founder of Georgetown Law’s Supreme Court Institute, has also directed the Appellate Litigation Clinic and chaired a Professional Responsibility Committee. 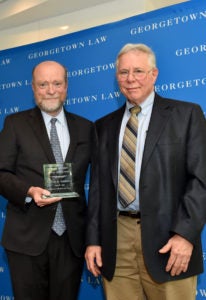 “It is a lifetime achievement award,” said Dean Treanor, who noted that while many members of the faculty could have been honored, fourteen colleagues championed Goldblatt. Georgetown Law’s Supreme Court Institute has recognized, even by the justices themselves, for transforming appellate advocacy before the Court, Treanor noted. “It is an extraordinary asset to our nation.”

The new Faculty Service Award is named for the late Professor Steven Goldberg, a beloved faculty member who taught at the Law Center from 1977 until his death in 2010. Highly regarded in the areas of law, science and religion, Goldberg was known for his selfless dedication to the Georgetown Law community (and he was a co-winner, along with Professor Gerry Spann, of the first Frank F. Flegal Excellence in Teaching Award in 1995). Goldberg’s wife Missy Goldberg, his children and grandchildren were present at the event.

“[Steve Goldberg’s] generous spirit, and decades of contributions to the betterment of Georgetown Law and this community are unparalleled,” Treanor said. “He inspires us… He reminds us constantly of the importance of caring, of being generous, and above all, being kind.”