Judge Gertner’s keynote address at the 2019 American Criminal Law Review Symposium on Women’s Rights in the Criminal Justice System kicked off a day of thought-provoking presentations from Georgetown Law scholars examining the many ways in which women experience and shape the criminal justice system — as suspects, defenders, law enforcement officials, regulators, and public defenders, among other roles.

Many of their presentations were rooted in real-life stories from their time as practitioners. Gertner, now a Senior Lecturer on Law at Harvard Law School, spoke of two women who had come before her for sentencing, each charged with a non-violent drug crime. With one, Gertner ordered a psychiatric interview, which showed the defendant had a long history of suffering domestic violence, a fact that lessened her sentence by establishing diminished capacity. The other had her three-day-old infant taken from her for smuggling heroin in order to pay off a loan she had taken to cover a hospital debt. The government wanted a harsh sentence to “send a message” to the drug dealers she was working for. The idea that punishing her “would somehow send a message to the drug dealers that had so completely debased her, as the government suggested, was patently absurd,” said Gertner, who sentenced her to time served.

Gertner suggested that a wholesale rethink of criminal justice policy is needed to be fairer to both women and men, not just granting judges more discretion or reducing mandatory minimum sentences.

“Less time is not a criminal justice policy,” she said.

How can you represent those people? 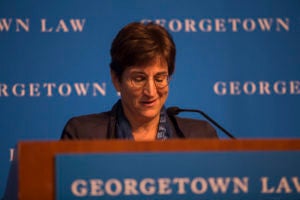 Professor Abbe Smith, director of the Criminal Defense and Prisoner Advocacy Clinic, longtime public defender, and self-identified feminist, explored the obligations of feminists in a time of mass incarceration and at a time of heightened awareness of sexual assault. She wanted to answer “the feminist subset of the…question, ‘How can you represent those people?’” as she put it.

Smith examined two high-profile cases, the six-month sentence of Stanford student Brock Turner, convicted of sexually assaulting a fellow student, and the decision of Harvard Dean Ronald S. Sullivan, Jr. to join Harvey Weinstein’s defense team. Smith’s main issue with Turner’s sentence was not its leniency, but that “the compassion shown in [his] sentencing is rarely shown to my clients,” she said, adding that his victim had requested treatment for Turner, not jail time.

Smith said she would defend Weinstein “zealously,” were he indigent and she were appointed to his case. But lawyers in private practice have more discretion. “The inequality between rich and poor defendants is made visibly worse when rich celebrities show up with dream teams of lawyers,” Smith said.

Professor Urska Velikonja, an expert in securities law, looked at women as both “law-makers and law-breakers.” The Securities and Exchange Commission (SEC), for example, offers on-site day care and telework in an effort to recruit and retain women. For eight of the past ten years, the agency has been led by a woman, and six out of fourteen commissioners over the past ten years have been female. But in other key decision-making roles, women are scarce: Between 1997 and 2017, just one of eight SEC general counsel has been a woman. And when senior officials leave the SEC for the private sector, women get fewer and less lucrative job offers than men, Velikonja said.

Within the private sector, women tend to commit fewer securities crimes and generally receive smaller fines. Only 18 percent of directors of Russell 3,000 companies are women. But Velikonja said it’s unclear whether women have a lower propensity for misconduct, or because they are less likely to be in senior roles that position them to commit significant wrongdoing. Until there are comparable numbers of women and men in corporate leadership, it will be hard to know.

One area where women do interact differently with the criminal justice system is when it comes to motivations, said Professor Jane Aiken, the Blume Professor of Law. She noted that the legal system presumes self-interest as a motive when disciplining law-breakers, but a closer look at cases involving women can often reveal another motive: selflessness. For example, many women who kill their partners endure years of intimate partner violence, but finally lash out the moment they see their husband abuse their children. Or they refuse to cooperate with police in cases involving a beloved boyfriend or partner, and because of that unwillingness to flip, wind up serving more jail time.

“Not that they’re not culpable, but I think there is a different kind of culpability when someone is acting out of a sense of selflessness or self-denial,” Aiken said.

Professor Christy Lopez, who formerly served as a deputy chief in the Special Litigation Section of the Civil Rights Division at the Department of Justice, questioned what it means to “police like a girl” in a hypermasculine work environment. Lopez suggested that women would not necessarily be immune to “the durability of a policing culture [that] exerts overpowering influence.” She suggested that both women and men learn to “police like a girl,” by insisting police think of themselves as “guardians rather than warriors.”