“The Man Nobody Knew: In Search of My Father CIA Spymaster William Colby,” is a 2011 film by Carl Colby (C’72) about the former CIA director.

Colby joined the CIA after World War II and later, in Vietnam, he would run The Phoenix Program, in which local South Vietnamese forces reportedly assassinated more than 25,000 members of the Viet Cong.

People said Carl Colby’s father was a murderer. But by 1975, Colby was testifying before Congress — 32 times in one year — about a list of CIA’s darkest secrets called the “family jewels,” detailing CIA assassinations, coups and spying operations.

On November 7, Georgetown Law’s Center on Ethics and the Legal Profession and Center on National Security and the Law, along with the University of Oxford, Delft University of Technology, Netherlands, and Charles Sturt University, Australia all teamed up to host “Intelligence Operations in Liberal Democracies: Ethics, Efficacy, and Accountability.” 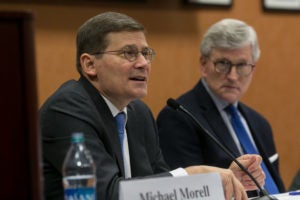 “The demand of efficacy says the intelligence community, the IC, has a duty to obtain information so that a country can understand the environment that it is acting within, especially the threats that it faces,” Regan said. “The demands of ethics recognize that other people don’t want to provide this information, generally, so the IC may well need to engage in deception, theft, coercion… The demand of accountability says that citizens should have assurance that the intentions [are consistent] with the values of liberal democracy. If they are not, no country can really claim that it stands for anything other than its own self-interest.”

After the film, Colby commented that there are eerie parallels to today. “I think my father would have [thought it inconceivable] to have a CIA without proper oversight…he helped create an oversight process that is essential and vital. Second, I don’t think he would have been too happy with the possible politicization of the intelligence community — I think he felt that they were loyal public servants [that should be] left to do their jobs, and not have the extra weight of some political concerns.”

How does the intelligence community deal with ethical tensions? “The character and the integrity of the people at the helm, whether it’s the president, the secretary of state, secretary of defense, director of the CIA or the DNI really matters,” Morell said, noting that there may be some aspects of one’s personality or one’s life “that you want to use in order to work for the United States as a spy…I don’t necessarily believe that the act of spying is somehow wrong, morally and ethically wrong…I think it matters greatly how you do that.” 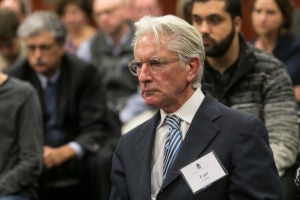 “One of the lessons I draw from the Phoenix Program is how easy it is for people who believe that they are trying to do something right…can so easily go down a path that actually fundamentally undermines the moral authority that they are trying to pursue…,” she said, noting that is challenging to figure out where the lines are — and that there are “different layers of ethical issues.”