Rebecca Epstein, director of Georgetown Law's Center on Poverty and Inequality, with 12-year-old student activist Naomi Wadler at "Girlhood Interrupted" at the National Museum of Women in the Arts on September 8.

Twelve-year-old activist Naomi Wadler, who spoke at the March for Our Lives in 2018 and who already serves as a youth advisor to Georgetown Law’s Center on Poverty and Inequality, says that when black girls play, “it’s not seen as play.”

“When we are being trendy, it is often seen as being sexual,” she said, noting that it isn’t right or fair that she and her peers need to teach their white counterparts and teachers how to treat all children equally. “I’m 12 years old and I’m already tired of it.” 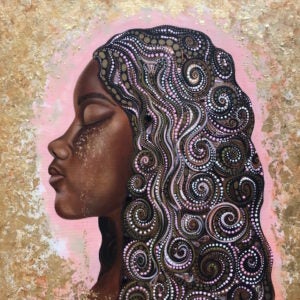 Wadler, who stood on a box to reach the podium and received the most applause of the evening, spoke at a September 8 presentation, “Girlhood Interrupted,” at the National Museum of Women in the Arts. The event focused on research conducted by the Center’s Initiative on Gender Justice and Opportunity, highlighting the life experiences of black girls and the bias that can influence adults’ perception of their innocence.

She called on more white women to step up for change and encouraged audience members to mentor black girls. “We must reject the media that misrepresents young black girls as dangerous, as adults, as sexual beings.”

Rebecca Epstein, executive director of the Georgetown Law Center on Poverty and Inequality, opened the event, noting: “We face a crisis in this country that’s rarely recognized in mainstream conversations — that black girls are placed in the juvenile justice system and taken out of the learning spaces of our schools in wildly disproportionate numbers to their white peers.”

Building on the Center’s 2017 quantitative study, “Girlhood Interrupted” — which showed that adults view black girls as more adult and less innocent than white girls (a stereotype called “adultification bias”) — a 2019 report, “Listening to Black Women and Girls: Lived Experiences of Adultification Bias,” reveals findings from focus groups across the country that examined whether the results of the original study align with the real lives of black girls and women, and what should be done to address adultification bias.

Jamilia Blake, an associate professor at Texas A & M University and a senior scholar at the Center on Poverty and Inequality’s Initiative on Gender Justice and Opportunity, explained to an audience comprised largely of women that the disparity in how black and white children are treated may result from the black girls’ being “not seen as girls; they’re being seen as women.” Blake, who co-authored the report, said their research showed that after age 4, black and white girls are perceived differently.

“What really surprised us was that as early as 5, black girls weren’t seen as being innocent, weren’t seen as needing to be comforted, were seen as more knowledgeable about sex,” Blake said. She added that not only are black girls overdisciplined nationally, but they’re disciplined for subjective infractions — such as dress code violations or disobedience — allowing biases to creep in. “If you’re sensitive to the stereotype that black girls are angry, you’re likely to see benign behaviors as being more aggressive and problematic than they actually are.” 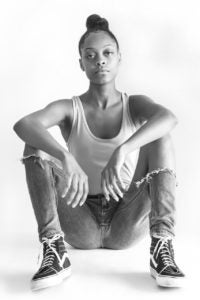 In creating photos in response to the erasure of black girls’ childhood, photographer Sancha McBurnie invited girls to come to the studio and simply be themselves.

Epstein said the Supreme Court has recognized, in multiple decisions, that children are immature, susceptible to peer pressure and still struggling to define themselves — and as such, we should be treating kids more leniently than adults. But stereotypes fueling the perception of black girls as adult-like, Epstein said, especially when they’re held by educators, prosecutors and judges, “have the potential to influence harmful determinations that have huge implications for our children.”

Black girls across the country have been more than five times more likely than their white peers to receive at least one out-of-school suspension and are treated more harshly across the board in the juvenile justice system, Epstein said.

The Center on Poverty and Inequality commissioned painter Ashley Joi and photographer Sancha McBurnie to create original works to complement the report, pieces that were displayed at a reception following the presentation. Both artists shared their perspectives with the audience.

Epstein stressed that the Center on Poverty seeks change at a system level, working to train educators and law enforcement officers. But Wadler, speaking quickly and confidently, also reminded everyone in the room of the power that lies within.

“Be a superhero to a black girl,” she said. “To the young black ladies in the audience, success looks like you. Stand in your black girl magic and use your power and speak your truth.”