“Wherever you practice, however long you are an attorney, I want you to think of yourselves as public interest lawyers,” said former U.S. Attorney General Eric H. Holder Jr., addressing the Georgetown Law Class of 2022 on April 14.

“You are emerging from an exceptional law school with elite training and outstanding credentials. My request of you today is that you will use these tools to be warriors and advocates for justice,” said Holder, the 2022 Dean’s lecturer to the graduating class.

Now senior counsel at Covington, where he was a partner from 2001 to 2009, Holder served as the 82nd attorney general of the United States under President Barack Obama. He was the first Black attorney general and his tenure was the third longest in that office.  He also chairs the National Democratic Redistricting Committee, an initiative launched in 2017 to reform partisan gerrymandering.

“His effect on the law has been profound and transformative,” said Dean William M. Treanor in his introductory remarks at the event, held in person for the first time since 2019. Following Holder’s address to the graduates, Treanor hosted a question-and-answer session with the former attorney general featuring questions submitted by students.

“It’s a pleasure to be among the first to welcome you all to the legal profession,” Holder told the audience of soon-to-graduate students. “I’m proud to be a part of this moment of transition as you shift from student to practitioner, from learner to leader.”

Holder began his address on a somber note, expressing his belief that democracy in the United States is currently in peril. He cited a number of examples, including 30 restrictive election laws enacted in 19 states since the start of 2021.

Despite these threats, however, Holder called for optimism. “The good news is that we know this country can change.”

He related the experience of his own father, an immigrant to the U.S. from Barbados who joined the military during World War II. “While he was proudly wearing the uniform of his country, the country that he promised to defend, he was told to move from a train car that was reserved for whites only and go to the back of a luncheonette to be served,” Holder said.

Holder urged graduating students to continue the fight to bring about positive change. “For nearly two and a half centuries, we have worked haltingly and often painfully to achieve our promise and fulfill our potential,” he said.

“Whether we succeed or fail in that objective now depends on us, on you.” 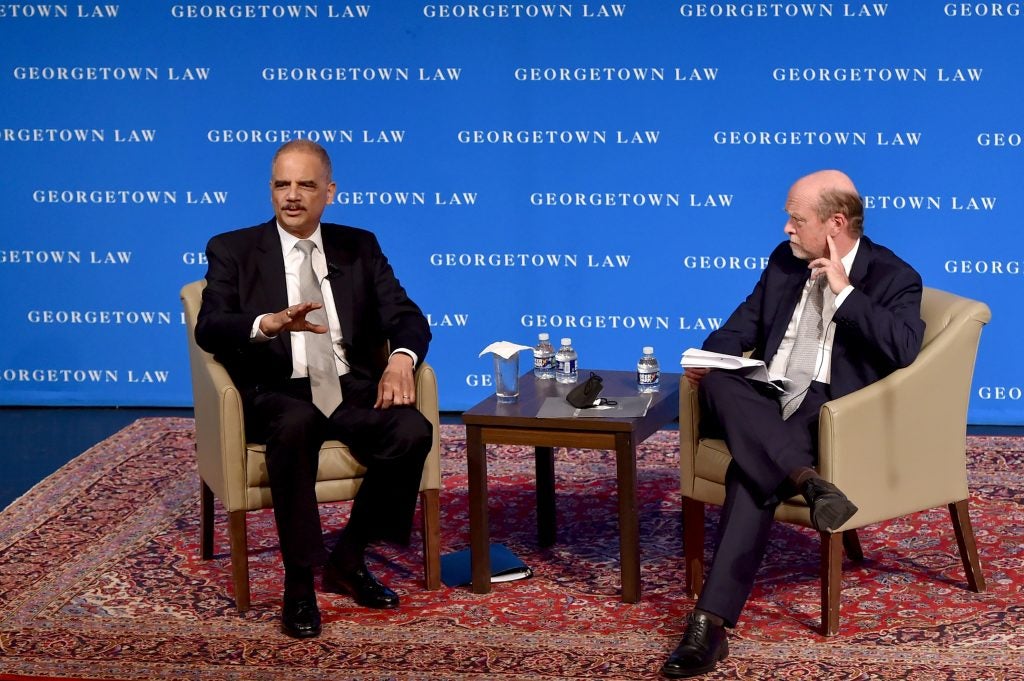 Following Holder’s lecture, he responded to questions from students, moderated by Treanor.

During the wide-ranging Q&A with Dean Treanor following his address, Holder offered advice for lawyers starting out (“don’t be afraid to experiment”) in response to a question submitted by Sephora Grey (L’22), and discussed his struggles with work/life balance in answering a question on defining success from Andrew Harmon (L’22). He also disclosed a few personal anecdotes about serving as attorney general — such as the novelty of having a security detail and private plane.

He spoke candidly with the students about successes and failures in his career. Eliane Bejjani (L’22) asked Holder if he felt there were unfinished pieces of his legacy as attorney general. Holder listed a number of issues, including the inability to pass gun control legislation following Sandy Hook and the failure to close Guantanamo Bay prison.

In addition, he highlighted the Supreme Court’s 2013 decision in Shelby County v. Holder that invalidated the preclearance requirements of the Voting Rights Act. “That was a difficult thing to experience in real time,” he said.

Holder has subsequently focused his post-government advocacy work on voting rights, co-authoring the forthcoming book “Our Unfinished March: The Violent Past and Imperiled Future of the Vote–A History, a Crisis, a Plan” (Penguin Random House, May 2022).

In his final remarks, Holder again challenged students to take action as advocates for justice. “Lawyers have been disproportionately responsible for the positive change in this country. You are all now the inheritors of that great tradition,” he said.

“Be optimistic, be idealistic, be committed, and change this nation.”

Watch the event below: