Georgetown Law’s faculty gathered on Wednesday, November 9 to celebrate the recipients of the Law Center’s 2021-22 Teaching and Faculty Service Awards.

In introducing Butler’s award, Associate Dean for Diversity, Equity, and Inclusion and Professor of Law Robin A. Lenhardt said, “Paul is creating a new way of thinking about the law – and creating a cadre of students going more deeply into the work we need to do to achieve justice.”

In support of his nomination, one of Butler’s students wrote: “Best Socratic-style professor I’ve ever had. [He] regularly challenged students with questions that engaged the other side of the argument, and I learned so much from listening and engaging in these discussions.” 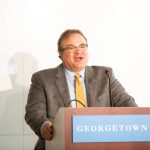 The Hon. Todd Edelman, Associate Judge for the Superior Court of the District of Columbia, received the Fahy Award for the Graduate Program. Edelman first came to Georgetown Law early in his career as an E. Barrett Prettyman Fellow, joined the adjunct faculty in 2004 and has been teaching at the Law Center off and on ever since, including two years as a full-time clinical professor. He currently teaches a Torts and Constitutional Law class for LL.M. students.

“[Professor Edelman] is incredibly knowledgeable, incredibly clear… experienced, understanding of diversity in class and funny [in] just the right amount,” wrote one student in support of Edelman’s nomination. 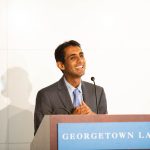 Mushtaq Gunja, Chief of Staff and Vice President of the American Council on Education, won the Fahy Award for J.D. Programs. Gunja, a former Assistant United States Attorney and Deputy Associate White House counsel, served as Assistant Dean in J.D. Programs at the Law Center from 2016 to 2018. He teaches courses in advanced criminal procedure, criminal justice and evidence.

“[Professor Gunja] approaches class with an utterly unique combination of grace, humility, humor and gentle intellect that frankly gives me hope for the law as a profession,” wrote one student in support of Gunja’s nomination.

The awards luncheon concluded with the presentation of the Steven Goldberg Faculty Service Award to Sheila Foster, the Scott K. Ginsburg Professor of Urban Law and Policy. The award is named for the late Professor Steven Goldberg, who is remembered for his dedication to the Georgetown Law community. 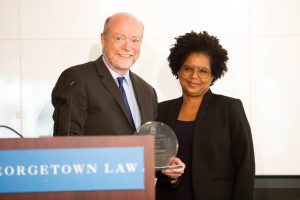 In presenting the award, Dean William M. Treanor cited the significant contributions Foster made as the Law Center’s first Associate Dean for Diversity, Equity and Inclusion, including implementing and co-heading the Georgetown Law Inclusion Council, organizing faculty trainings in implicit bias and leading plans to re-envision and expand the Office of Equity and Inclusion.

“She was above all a source of wisdom and grace and commitment,” said Treanor of working with Foster on these initiatives. “I can’t think of anybody who more perfectly embodies the core values of Steve Goldberg, making sure that this is a community in which everybody flourishes.”