Before the COVID-19 pandemic suspended campus events, Law Center leadership intended to hold monthly installation ceremonies to honor professors individually. Since this did not happen as planned, group celebrations took place instead.

On June 7, the Georgetown Law community gathered to congratulate seven professors who had been awarded named professorships since early 2020. The event was hosted by Professor Lilian Faulhaber, Associate Dean for Research and Academic Programs, standing in for Dean William M. Treanor, who was unable to attend.

Reading citations detailing the achievements of each recipient, Faulhaber presented the following professorships:

This professorship was established by Hope C. Reynolds (B’75, P’03) and Thomas A. Reynolds III, (B’74, P’03). Mr. Reynolds, a partner at Winston & Strawn and former assistant Attorney General for the State of Illinois, is the current chair of the Georgetown University Board of Directors and has served on several other boards and committees at the University and the Law Center. 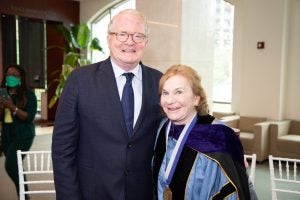 Professor Susan Low Bloch
“For the many contributions she has had on the fields of constitutional and administrative law during her storied career; for her role as a mentor and teacher to generations of students; and for the indelible impact she has had on Georgetown Law during her 39 years as a member of the faculty, I am honored to name Sue Bloch the Reynolds Family Endowed Service Professor.”

THE Edward and Carole Walter Professor of Law

This new professorship was established through the generosity of W. Edward Walter (L’80) and his wife, Carole. Mr. Walter, Global CEO of the Urban Land Institute, is a member of the Georgetown Law Board of Visitors and served as the Steers Chair in Real Estate at Georgetown University’s McDonough School of Business. 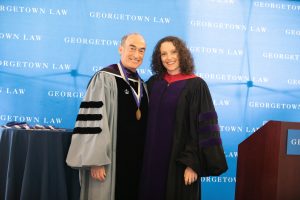 Professor William Buzbee
“For his pathbreaking scholarship focusing on environmental law, regulatory design, regulatory federalism, and the role of citizens in shaping the law; for his impact on our country’s regulatory litigation and policy making; and for his steadfast commitment to environmental leadership as an advocate and educator, I am honored to name Bill Buzbee the inaugural Edward and Carole Walter Professor of Law.”

THE SCOTT K. GINSBURG PROFESSOR OF LAW AND TECHNOLOGY

Scott K. Ginsburg (L’78), owner of Boardwalk Auto Group in Dallas, is one of the most generous living donors to Georgetown Law. In addition to sponsoring multiple professorships, his gifts have also supported campus improvements like the Scott K. Ginsburg Sport & Fitness Center. 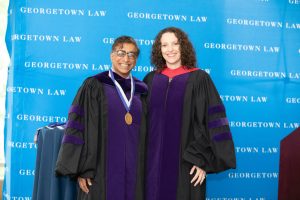 Professor Anupam Chander
“For his renowned scholarship on global technology governance and the role of law in global development; for his groundbreaking work identifying and naming a new form of global capital raising known as diaspora bonds; and for his lifelong dedication to exploring the field of technology, I am honored to name Anupam Chander the Scott K. Ginsburg Professor of Law and Technology.”

THE BLUME PROFESSOR OF LAW

The Blume Professorship was established as part of a gift from Bruce (L’80) and Ann Blume that created the Blume Public Leadership Institute. Mr. Blume currently serves on the Law Center’s Board of Visitors and the Georgetown University Board of Directors. 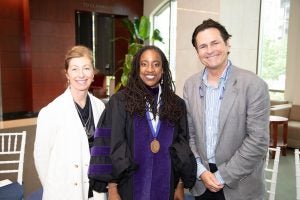 Professor Kristin Henning
“For her deeply impactful work examining race, adolescence, and policing; for her inspiring leadership as an advocate for youth and racial justice reform; and for the countless lives she has changed, both in her role as a teacher and as a defender, through her passion, humor, and fierce belief in the importance of challenging inequities in our justice system, I am honored to name Kris Henning the Blume Professor of Law.”

This new professorship was made possible by the late J. Crilley Kelly (L’73), in memory of his beloved wife, Terry, both of whom had impressive careers as business executives. 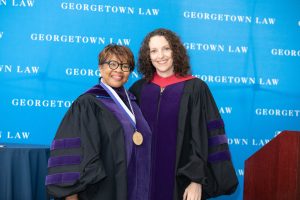 Professor Emma Coleman Jordan
“For her revolutionary work establishing the field of economic justice in legal theory, her lifelong leadership and advocacy in the financial services field, tirelessly working to promote justice and equality within the system and for serving as a role model for future generations on how to lead, advocate and persevere, I am honored to name Emma Coleman Jordan the J. Crilley Kelly and Terry Curtin Kelly Professor of Business Law.”

THE CARROLL PROFESSOR OF JURISPRUDENCE

Established in 1996, the Carroll Professorship celebrates “jurisprudence,” a term which derives from the Latin jurisprudentia, meaning the science or knowledge of law. 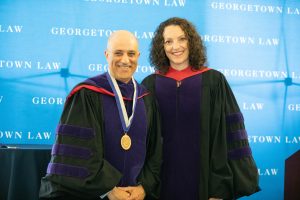 Professor John Mikhail
“For his truly cross-disciplinary research, which cuts across philosophy, cognitive science, legal history, and constitutional law, to name only a few subjects; for his contributions to fields stretching from moral psychology to legal theory to artificial intelligence to human rights; and for his work highlighting the importance of history in contemporary understandings of the Constitution, I am honored to name John Mikhail the Carroll Professor of Jurisprudence.”

This new professorship was established through a bequest from Frank B. Sherry (L’40) and by alumni in the Intellectual Property field. Mr. Sherry, a graduate of Georgetown Law’s evening program, was a dedicated public servant whose career included work at the U.S. Patent Office and as president and vice president of the American Federation of Government Employees. 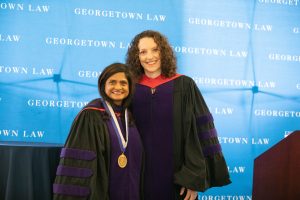 Professor Madhavi Sunder
“For her years of work highlighting the ways that intellectual property law affects so many parts of our lives, from art to health to design; for her dedication to expanding access to intellectual property to those to whom access has previously been denied; and for her commitment to fairness and equity, I am honored to name Madhavi Sunder the Frank Sherry Professor of Intellectual Property.”

One additional professor who recently was awarded a named professorship was unable to be present at the event:

The Carmack Waterhouse Professorship of Law

These professorships were established through a bequest from the estate of Carmack Waterhouse (L’35) and his wife Mary. Waterhouse was a longtime patent attorney with the Atomic Energy Commission. 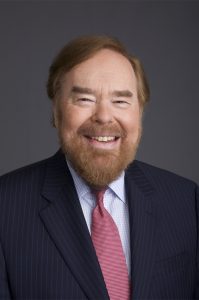 Professor Paul Rothstein teaches courses in evidence and torts, and his professional experience has ranged from advising both houses of Congress on the Federal Rules of Evidence, the Crime Victims Compensation Act and revisions to the Criminal Code; to helping draft the constitutions of Russia and several other countries emerging from the former Soviet Union; to supporting the formation of the American and International Crime Victims Compensation Associations. Rothstein is a frequent media commentator and a prolific author — according to SSRN, he is among their “top 10% of authors by all-time downloads.” He has held various leadership positions at the American Bar Association, Federal Bar Association and Association of American Law Schools. At Georgetown Law, he helped found the student-run Gilbert & Sullivan society (and has lent his baritone voice to its productions).