Federal agents are using “big data” to surveil undocumented immigrants in Maryland — and possibly deport them.

So charged Lynn Arbid, a first-year law student who recently participated in a mock hearing on the threats facial recognition technologies pose to privacy, civil liberties, and civil rights. “Residents did not consent to taking part in a criminal lineup,” Arbid testified during the fictional hearing. “Yet that is essentially what is being done.”

The hearing came at the conclusion of a new experiential learning course that took place during “Week One” — the week leading up to the beginning of the spring semester.

Offered as part of the Law Center’s expansive experiential education curriculum, Week One simulation courses give 1Ls the opportunity to practice critical legal skills like conflict resolution, negotiation, and collaboration, in a supportive environment — and provide an early taste of experiential learning, which is more common in upper-class courses.

In addition to facial recognition technology, this year’s optional 4-day Week One courses for 1Ls ran the week of January 11 and included simulations in corporate malfeasance, financial regulation, labor reform, global health, and other topics.

Arbid’s facial recognition course was based on the real-life experience of Georgetown Law students who testified last year before the Maryland General Assembly in support of legislation that would require federal agents to obtain a warrant before searching records and images filed with Maryland’s department of motor vehicles. Their testimony came midway through a year-long federal legislation clinic taught by Adjunct Professor Emily Tucker, a movement lawyer. 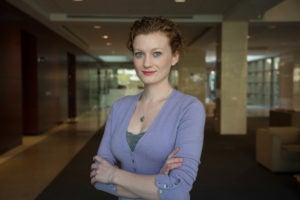 Now the director of research and advocacy at Georgetown Law’s acclaimed Center on Privacy and Technology, Tucker drew on last year’s clinic to create an accelerated Week One course in “legislative lawyering.” Clare Garvie (L’15), a senior associate at the Center and a leading authority in face recognition, co-taught the course. I wanted to “throw them into the fire” in a low-stakes, pass-fail environment, Tucker said.

The students ran with it. Playing the role of a friendly colleague, first-year evening student Stephen Mayeaux said he was “appalled” by the revelations and voiced strong support for Arbid’s bill, while Kyle Tillotson (L’23), playing a hostile state senator, claimed it would “gunk up the wheels of law enforcement.” Other students weighed in as advocates for immigrant rights, crime victims, expert witnesses, and lawmakers across the ideological spectrum.

“The students showed a really impressive grasp of the material and also had a really solid understanding of their legislative roles,” observed Nana-Kwabena Abrefah (L’21), who testified on behalf of the bill last year and who served as a teaching fellow in this year’s accelerated course.

The subject’s timeliness and relevance added to the intrigue, Garvie said. Police around the country use facial recognition software, and the country is currently wrestling with how to regulate mass data collection. That makes the course a “nice contrast” to most first year content, which centers on the history of law rather than its present and future, Garvie said.

The issue is also rising on the nation’s political agenda. The Washington Post recently cited Garvie’s scholarship on the issue in an editorial calling for a nationwide moratorium on police use of face recognition technologies, which are especially inaccurate when used to identify people of color. And legislation that would bar warrantless face recognition searches for immigration enforcement is now making its way through the Maryland General Assembly.

“The wild thing,” according to Garvie, is that students who participated in the simulation may someday have the power to impact the very laws they debated in class. After all, that’s what she did after graduating and joining the Privacy Center’s staff. “That’s the students’ potential future,” she said.