When President George W. Bush authorized waterboarding after the 9/11 attacks, Elisa Massimino saw the administration’s policy as a gross violation of human rights.

Then a director at Human Rights First, she launched a campaign to end the torture of terror suspects and restore U.S. compliance with international law.

But a year in, her effort had failed to gain ground. Policymakers and members of the public were buying into the administration’s argument that military officials needed to “take the gloves off” so they could obtain intelligence that would prevent future attacks and keep Americans safe.

Sensing defeat, Massimino changed the strategy. She assembled a coalition of retired generals and admirals who spoke out against torture, framing it around security rather than human rights. So-called “enhanced interrogation techniques” yield bogus information, cost valuable intelligence, and fuel terrorist recruitment, they argued, leaving the nation less safe.

The messaging shift worked: In 2009, President Barack Obama shut down secret prisons and banned torture in accordance with the Geneva Conventions.

Massimino – the 2019-2020 Robert F. Drinan, S.J., Chair in Human Rights at Georgetown University Law Center – told that story in a March 4 lecture on how to advance a human rights agenda in a time of political polarization. At the heart of her message was an exhortation to embrace two “seemingly opposite” virtues: chutzpah and humility.

“Any good advocate needs a little chutzpah to get in the game and to stand up to the doubters who say, ‘Who do you think you are?’” Massimino said. “But to actually get where we want to go, we also need a strong dose of chutzpah’s quieter, less flashy twin, humility.”

Those qualities have served Massimino well, giving her the courage to stand up to the president of the United States during a time of war and the self-awareness to recognize a strategic mistake and change course midway through a major human rights campaign.

But chutzpah and humility aren’t always easy to practice, especially in this day and age, she said. To remind herself of their value, Massimino looks to a Lily Tomlin quote taped to her office wall. “I saw something terrible happening, and I thought, ‘Somebody should do something about that,’” it reads. “And then I realized I am somebody.”

‘Joy in the Struggle’

She shared lessons from three decades in the trenches of human rights advocacy, including a decade as president and CEO of Human Rights First. And she remembered Drinan, a preeminent human rights advocate who mentored her early in her career and who taught at Georgetown Law until his death in 2007. 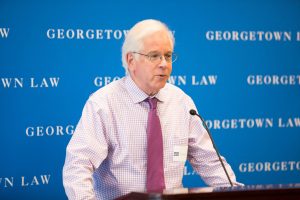 In his introduction, Professor Andrew Schoenholtz, director of Georgetown Law’s Human Rights Institute, said Massimino followed Drinan’s example in her distinguished career. He called it a “special honor” to introduce a woman he once worked with to help people seeking asylum stay in the United States.

Progress, Massimino reminded the audience, doesn’t happen by chance. Rather, it is the result of strategic campaigns for social change, which involve many complicated and difficult decisions, such as which issues to prioritize in a “world full of problems,” whether to seek incremental change or go for the “big win,” and whom to partner with – and whom to avoid.

Some decisions are especially fraught, such as whether to accept “tainted” money from donors who back other abhorrent policies or who have engaged in inappropriate behavior. Another ethically thorny issue: how and when to compromise when progress is within reach.

“Who is right?” Massimino asked. There is no easy answer to that or other tough questions facing advocates for social change, she said. Her best advice: Cultivate the “twin virtues” of chutzpah and humility in the quest for progress – and take “joy in the struggle.”

Because Georgetown Law has moved to a virtual learning environment and canceled on-campus events during the spring semester, the 2020 Samuel Dash Conference on Human Rights will be postponed. However, students in the Human Rights Fact-Finding practicum will still present the findings of their spring semester project on the impact of U.S. policy changes on Central American asylum seekers. The virtual presentation is tentatively scheduled for mid-April. Please email Melissa.Stewart@georgetown.edu if you wish to be notified of the final date.