Nikki Endsley (L’19) on Human Rights at the Border: Finding Hope in a Dark Place

Nikki Endsley (L’19), right, helped organize the team of 14 members of the Georgetown Law community who traveled to Dilley, Texas, with the Human Rights Institute last winter. In March, Endsley was named “Law Student of the Year” by the National Jurist.

Nikki Endsley (L’19), who recently graduated from Georgetown Law, was instrumental in organizing a team of 14 members of the Georgetown Law community who traveled to Dilley, Texas, last December with the Human Rights Institute. In March, Endsley was named “Law Student of the Year” by the National Jurist. 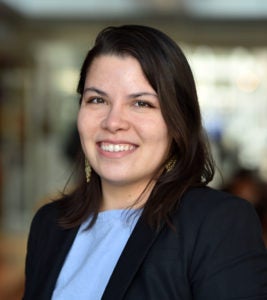 Hearing of the injustice her family experienced as Vietnamese refugees, Endsley developed a passion for human rights and social justice. She graduated with honors from Yale in 2013, majoring in Religious Studies and Anthropology and receiving a community service award for her work in the New Haven area. By the time she entered Georgetown Law in fall 2016, she had already created an astonishing work portfolio that included five languages. Endsley’s externships while at Georgetown Law included work at Disability Rights International, Catholic Charities, Human Rights First, the Alexandria Public Defender, International Refugee Assistance Project, Whitman-Walker Health and UNHCR. She is a Blume Public Interest Scholar and a Skadden Fellow.

Endsley’s essay is on page 54 of the issue and also appears below.

Arla* had a good job as a medical assistant before she was forced to flee Guatemala. Her husband’s abuse — physical, mental and emotional — had hit a fever pitch in the weeks before her departure, causing her to fear for her life and depart the country with her young daughter. The recent abuse was, in many ways, merely another layer to the years of suffering she had experienced at her husband’s hands, from death threats, to control over her movement, to the seizure of her hard-earned money, to brutal beatings if she was ever found praying or attending church. Her pleas to police went unanswered because, as they said, they do not get involved in “domestic matters.” And when her husband joined a powerful gang that the government had shown itself incapable and unwilling to control, she knew that his enhanced access to weapons and networks around the country meant that he would make good on his threat that she could never be safe in Guatemala if she tried to leave him.

After my Georgetown Law partner and I prepped with Arla for about five hours, helping her understand what parts of her story were legally significant, I accompanied her to her credible fear interview (referred to as a “CFI”). She was required to tell her story before an Asylum Officer who would decide whether or not she had a “significant possibility” (a fairly low legal standard) of later winning asylum at her merits hearing before a judge. Arla and I were escorted into separate spaces by employees of CoreCivic (formerly the Corrections Corporation of America, the corporation contracted to manage prisons and detention centers like the one at Dilley). Both of us were prepared for the worst. Yet instead — we were met with an incredibly kind Asylum Officer, one who listened patiently to Arla’s story without interruption, paused to offer her tissues and a cough drop when she faltered, and recommended mental health counseling at the conclusion of the interview. I was, quite simply, astounded, and Arla was ecstatic.

Indeed, what I was most surprised by during my week at Dilley were the shows of humanity I witnessed: humanity amongst the women and children detained there, who despite their lack of access to potable water, their isolation, their illnesses and their carceral surroundings, supported and held each other up; the humanity amongst the Dilley Pro Bono Project staff who put their young lives on hold to provide necessary assistance and oversight at this portion of asylum seekers’ journeys. I also saw the humanity amongst the Georgetown Law volunteers who celebrated their New Year far from friends and family and gave their heart and soul to working with these vulnerable women and children for hours each day. In the case of this particular Asylum Officer, I saw the humanity that can sometimes be glimpsed in other parts of our immigration system.

All of this is not to say that I didn’t witness great cruelty as well. Many of the mothers and children that I met with fled immense danger and are now incarcerated and facing uncertain futures. I have worked in refugee camps around the world, and as a native San Antonian and a human being deeply invested in justice and compassion in our immigration system, I have followed the news around the Southwest border carefully for many years. As the Georgetown Law team arrived in Dilley against a backdrop of a government shutdown over a border wall, I was not expecting to be reminded of the many different ways in which our law degrees could be employed in making our immigration system more humane. But reminded I was, that there are many ways to serve and that there is always hope in a dark place, even in such a place as the South Texas Family Residential Center.