The jury is still out (so to speak) on whether justice was served Wednesday night at Georgetown Law’s Hart Auditorium. But those who witnessed — and participated in — the Theater of Law production of a scene from Aeschylus’ Eumenides could all agree that the night was a moving and thought-provoking success.

The play, which was written in the 5th century B.C. and centers on the trial of Orestes for the killing of his mother Clytemnestra, depicts the genesis of trial by jury in the western world. After a dramatic reading of the climatic courtroom scene by stage and screen stars Obi Abili, Elizabeth Marvel, Linda Powell and David Strathairn, Georgetown Law Professors Paul Butler, Naomi Mezey, Sherally Munshi and Julie O’Sullivan gave their reactions to the powerful performance. In the play, one of The Furies, who serves as prosecutor, screams in anguish after a tie jury vote is decided in Orestes’ favor by the goddess Athena, who serves as judge. 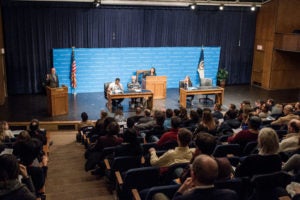 Dean Treanor with the Theater of Law actors in Hart Auditorium.

“I thought it was brilliant,” said Dean William M. Treanor, who welcomed those assembled for the event, sponsored by the Office of Alumni Affairs. “What an extraordinarily powerful play. The enthusiasm of the audience was heartening.” 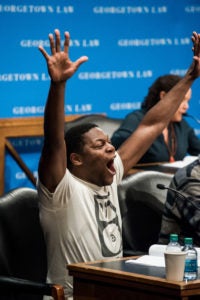 Treanor chose the four faculty members in order to have a range of perspectives: while Professor Paul Butler is a former prosecutor, his late father had been an actor who had performed previously with Powell, the daughter of retired General Colin Powell. Powell’s mother, Alma, was in the audience.

Butler noted that the character of Orestes “looked like a lot of the people I locked up [as a prosecutor.] My trials often felt like performances.”

Mezey called the trial system a kind of “imperfect justice” that is “always premised on loss.”

More than one audience member said the play, which is highly gendered and suggests that the life of a male/father was more highly valued and considered more worthy of vengeance than that of a woman/mother, made them think of today’s #MeToo movement, as well as other current events. 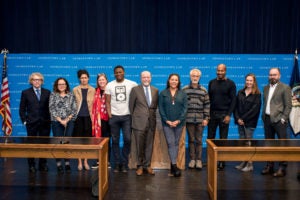 Dean Treanor with the actors and professors of “Theater of Law”

“The Fury expressed how I felt after the Kavanaugh hearing, that primal rage,” said O’Sullivan. “Nothing much has changed, except moving beyond private vengeance to a system of laws.”

Munshi reflected on questions including the place of women’s anger within the sphere of justice. Other themes the audience noted were the transactional nature of justice versus its more sacred nature; and the issue of prosecutorial discretion. The jury in the scene is equally split, causing defense attorney Apollo, played by David Strathairn, to declare that “a single misplaced vote can bring down a house.”

Brought to the Georgetown Law by Theater of War Productions in Brooklyn and the Forum on Law, Culture, & Society at the NYU School of Law, the show has only been performed four times, and not always with the same cast. Director Bryan Doerries said the group plans to take it on the road to the Supreme Court and the United Nations. 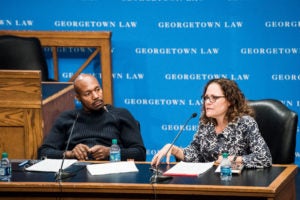 Theater of War Productions describes itself as a social impact company that uses theater and other media to address pressing public health and social issues. The group routinely performs ancient Greek plays for veterans and caregivers as a way to talk about the wounds of war.

“We just came to start a conversation,” Doerries said as the evening wound down. “We didn’t come to finish it.”