Indi Dutta-Gupta of Georgetown Law's Center on Poverty & Inequality moderates a panel on homelessness at "The Color of Surveillance: Monitoring of Poor and Working People" at Georgetown Law on November 7.

“The powerful have long agreed that poor and working people must be watched,” says Visiting Professor Alvaro Bedoya, as he opened Georgetown Law’s fourth conference on “The Color of Surveillance” on November 7. Past conferences have explored the government 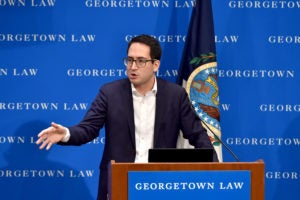 surveillance of African Americans, America’s religious minorities and immigrants; this year’s conference looked at the monitoring of poor and working people. The event was hosted by Georgetown Law’s Center on Privacy & Technology, with the  Institute for Technology, Law & Policy; Center on Poverty & Inequality; and the Workers’ Rights Institute as cosponsors. 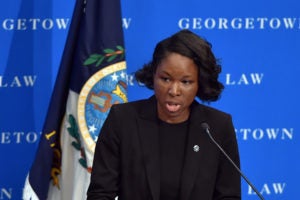 There is an “ahistorical quality” to the surveillance when it comes to the surveillance of poor and working people,” noted Bedoya, who is the founding executive director of the Center on Privacy & Technology and director of the Federal Legislation Clinic. “When I hear about the data collection of unhoused folks on skid row, when I hear about Amazon patenting a…wrist band to track workers’ every move, it feels new, and I want to say it’s never happened before. The reality is that the powerful have long agreed that poor and working people must be watched.”

Center Associate Gabrielle Rejouis (L’18) noted that surveillance is key to rescinding benefits and revoking eligibility, as well as demeaning and discouraging current recipients. “The erosion of the American safety net is fueled by surveillance,” she said. “Today we’ll explore intersections between class and other marginalized identities. We would be remiss not to highlight how the surveillance of enslaved African Americans provided the blueprint for surveillance…let us not forget Dr. Martin Luther King Jr. was assassinated while supporting a strike of black Memphis sanitation workers, or that the infiltration of the Black Panther Party by the FBI disrupted poverty relief programs. In this current Administration, [we must] also talk about the overlapping surveillance for immigrant workers.”

Presentations throughout the day included one by University of Maryland Professor Michael Reisch on the role of state social control in Anglo-American public benefits — since the year 1349. “Over the last number of centuries, while the means of surveillance have changed, the goals of surveillance have not,” said Reisch, who in a “whirlwind introduction” covered the Elizabethan Poor Laws, the laws of Colonial America, the Industrial Revolution, slavery in America and much more. 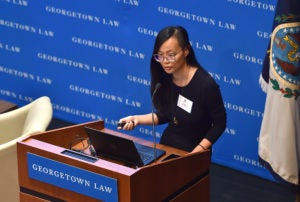 Independent artist Xena Ni described how a new computer system in D.C.’s Department of Human Services negatively impacted public benefits in 2017. Ni subsequently created an art exhibit that described the fallout, including thousands of grocery store receipts, signs outlining the 15-step process for benefits and personal stories written on walls. To her knowledge, the company was never held publicly responsible. “I like art that points fingers,” Ni said.

And there’s no obvious indication that the new contractor, who will be paid almost a hundred million dollars, will do things any differently, she said. “If you compare that lack of accountability to the amount of scrutiny that someone applying for a SNAP [benefit] goes through, it’s night and day. The average SNAP benefit is about $140 a month, or a dollar and forty cents per person per meal. And [they] ask people to fill out a 16-page application, to tell us who you live with, how do you prepare food together, how much do you spend on food…all these invasive questions over a benefit amount that is minute, compared to the amount that we pay government contractors with relative lack of scrutiny for their actions who can cause much more harm.” 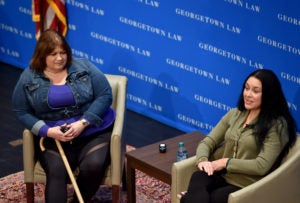 Kelly Miller with Tristia Bauman of the National Law Center on Homelessness & Poverty.

Indivar Dutta-Gupta, co-executive director of Georgetown Law’s Center on Poverty & Inequality, participated in a discussion of homelessness and scrutiny with Tristia Bauman of the National Law Center on Homelessness & Poverty, and Kelly Miller, a homeless woman from Kentucky who was targeted by people in power.

“I went to the very first Color of Surveillance conference,” Dutta-Gupta said. “I was so blown away, and somehow they’ve managed to make it better and better every year.”