‘Leaders Fix Things’: Educating the Next Generation of Leaders in Law and Beyond

Install more bike racks on campus. Give discounts to students who bring their own mugs. Upgrade outdated heating and lighting systems, replace old windows, and use solar panels. Promote sustainability on campus and with other departments and law schools.

These are a few of many ways Georgetown University Law Center can build a greener campus, according to students in the Business Law Scholars program. After conducting extensive research into the issue, a handful of scholars offered dozens of recommendations — both for the short and long term — during a recent presentation to peers, faculty, and staff, including Dean William M. Treanor. The presentation was the culmination of a unique leadership seminar co-taught by Treanor, who is emphasizing leadership skills in legal education as a way of producing leaders in the field of law and beyond.

“One of the things that we’re really trying to do in different ways is to become a school that’s very focused on educating leaders,” Treanor said. “Historically, Georgetown has educated people who’ve made a difference in the world. But what we’re trying to do right now is to be very intentional about it.”

The leadership seminar is one of several courses now offered at Georgetown Law that teach leadership skills like teamwork, networking, and public speaking. Such “soft” skills are woven into the curricula not only of the school’s business skills program but also to other specialized programs and to new seminars open to all students, including a “Lawyers as Leaders” class that broke registration records last fall. The Law Center also offers a suite of leadership training courses for executives and may in the near future house a “leadership institute” that Treanor said would help establish Georgetown Law as the nation’s preeminent place for leadership education.

“There’s so much of life in which you just become enmeshed in the day to day, and you don’t stop and reflect about, you know, where do I want to go and how do I get there and what are the steps along the way,” Treanor said. The Business Law Scholars leadership seminar, developed and led by Assistant Dean Hillary Sale, an award-winning professor of business and law, “breaks it down.”

“If there’s one word that sort of encapsulates what we’re trying to accomplish, it’s ownership,” said Sale, who believes that student-led initiatives give scholars a stake in the institution and an opportunity to contribute to real change. “Leaders,” she quipped, “don’t whine. They fix things.”

The leadership seminar, and the Business Law Scholars program in general, are among the first in the country to heavily integrate leadership and other traditional business skills into legal education, according to Stephen Hills, the program’s founding director and the former president and general manager of Washington Post Media. “Nobody’s doing what we’re doing,” he said.

In addition to its unique leadership seminar, the Business Law Scholars program offers courses ranging from accounting and finance to tax and securities law, as well as a “mini M.B.A.” that explores how businesses function in the marketplace. In addition to a “bigger picture” education about the world of business, the program covers the realities of business, like mergers and acquisitions, derivatives, and capital markets — content that primes students to practice corporate law and counsel or start companies. The program also hosts networking events, brings speakers to campus, offers students mentorship opportunities, and more. 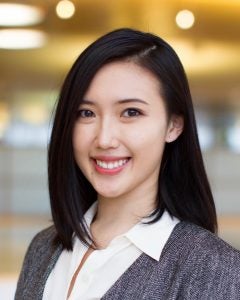 The result: a one-of-a-kind education at the intersection of business and law that educates future leaders. “It’s about how you’re a lawyer, but at the same time you’re in the bigger business ecosystem,” explains Hera Liao (L’20), a Business Law Scholars alumna who is now a first-year associate at Latham & Watkins. “It teaches people how to work with people who are not lawyers.”

The cohort system and semester-long project were a “safe harbor” to test out communications skills, she added. “I definitely appreciate that as I am encountering various personalities and sometimes challenging situations.”

The program “covers a lot of the highlights … of a traditional M.B.A.,” added Aaron Reuben (L’21), a member of this year’s business program cohort. It also helped him distinguish himself in the job market, he said, noting that his specialized coursework sparked interest during job interviews. 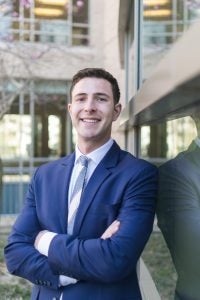 Reuben and Liao both touted the program’s signature leadership seminar, saying it helped them expand their networks and take charge of their career development. Another key program benefit: close interaction with Hills, a business titan who transformed the Washington Post Media Company from a print-centric legacy organization to a digital powerhouse that was named the “most innovative media company in the world.” Learning from him, Liao said, was “amazing.”

The Business Law Scholars program, nearly a decade in the making, is the vision of Treanor, Hills, Sale, and other leaders including investor and philanthropist Sara Crown Star (L’85). Like other scholars programs, it accepts a small cohort of students who study together over the course of their law school careers. Applications from first-year students will be accepted through late December, and selections will be made in January 2022.

“It’s a heavyweight program” that Hills said enhances Georgetown Law’s reputation as a center for excellence in ethics and public service.

“People think of Georgetown for its dedication to social justice, and that is right,” Hills said. “But it is important to see that business is not in opposition to social justice. We are starting to see — with recent events — that corporations are one of the great potential sources of ethical behavior and can be powerful drivers of societal change.”

Training the next generation of business leaders, he said, is “absolutely core” to that mission.