The 2020 Ambassadors for Racial Justice cohort gathered at Georgetown Law over MLK weekend.

In a fitting way to honor and carry on Dr. Martin Luther King Jr.’s life work, 10 juvenile defenders from across the country recently gathered at Georgetown Law over a chilly MLK holiday weekend.

Together, the geographically and racially diverse group marked the start of their yearlong service as “Ambassadors for Racial Justice.” They are part of a pilot program, sponsored by Georgetown Law’s Juvenile Justice Initiative and the National Juvenile Defender Center (NJDC), that seeks to bring racial justice concerns to the forefront of juvenile justice advocacy and empower advocates to develop innovative ways to challenge systemic inequities. 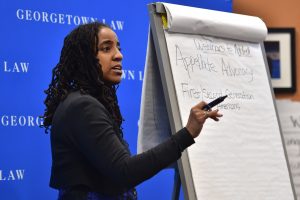 The program’s formation was inspired by the “tremendous racial disparities” Georgetown Law Professor Kristin Nicole Henning has witnessed during her 25 years representing youth in the District of Columbia.

“Ninety-nine percent of the kids that I’ve represented have been black and brown,” said Henning, who directs both the Juvenile Justice Initiative and its student clinic. “It’s hard to sit and watch that and not try do anything about it. So, we began to think about how to challenge racial injustice within our direct representation.”

That’s exactly what new ambassador Kelley Jones had been trying to do in her work as an attorney with the Clark County, Nev., Public Defenders Office when she decided to apply for the program.

“I have been raising race as an issue in my practice in Nevada and so this was going to give me an opportunity to do a deep dive and become more effective and efficient,” she said.

Henning says that courts have only recently become more receptive to arguments highlighting racial injustice. She points to the 2016 Massachusetts Supreme Judicial Court ruling that cited a Boston police report documenting a pattern of racially profiling African-American men and concluded that a suspect fleeing police does not alone indicate that the suspect was acting with consciousness of guilt.

Similar kinds of evidence might influence judges in other cases, Henning believes. For example, implicit racial bias studies have shown that police officers can misinterpret body language and judge facial expressions and movements by black children as more aggressive than by white children, she said.

Among the resources the ambassadors will have at their disposal is a Racial Justice for Youth toolkit for defenders containing, among other things, a bibliography of implicit bias studies. The toolkit, also developed by Georgetown Law’s Juvenile Justice Initiative and NJDC, includes a host of other resources, including practice tools, case law supporting racial justice arguments, sample motions, and a juvenile defense “raising race” checklist.

“We were intentional in selecting a diverse group,” Henning said, “and we hope that by working on issues of racial injustice, youth defense becomes even more attractive to attorneys of color.”

Beyond equipping ambassadors with tools to raise racial equity issues in their practices, the ambassadors will complete capstone projects that will advance systemic change in their jurisdictions.

“It became clear that we weren’t going to address racial injustice in the juvenile legal system only through individual case representation,” Henning said. “We needed to be thinking systemically about policy reform, legislative advocacy, community education, and coalition building.”

The capstone project is a key component of the program, and the ambassadors have been paired with mentors to help them develop their initiatives. The group spent time at the end of the training weekend brainstorming ideas.

Jones, the Nevada-based defender, said she was considering a project aimed at eliminating direct file in her state – the ability of prosecutors to send certain juvenile cases directly into the adult court system. Or, she may advocate for a requirement that police officers notify a defender whenever they stop a juvenile. Police in her jurisdiction frequently make pretextual stops, she said, often for jaywalking.

“Every police report I read almost always says, ‘and the suspect juvenile waived their Miranda rights,’” Jones said. “I think if they understood their Miranda rights and what it actually meant – and if they had an attorney there to advise them – that would make a huge difference.”

Every Issue is a Racial Justice Issue

Jessica Gingold (LL.M.’18), a staff attorney at the nonprofit Lawndale Christian Legal Center in Chicago, said choosing a capstone project idea will be difficult for her because “basically every issue in the juvenile justice system is a racial justice issue.”

Like Jones, Gingold is thinking about targeting police tactics she sees as unfair. In Chicago, she said, some units are dispatched with the sole mission of “aggressively seeking out crime,” as opposed to responding to service calls.

“They’re literally just driving around looking for things, which results in stopping my client while he’s walking home from his girlfriend’s house or pulling over cars for things that would never get our car pulled over for,” said Gingold, who previously served as a teaching fellow with Georgetown Law’s Juvenile Justice Clinic. “I think these kinds of stops are unconstitutional, so I’d like to stop that.”

The group will support each other’s efforts throughout the year and participate in monthly trainings together online. They’ll also reconvene in November. Henning said she hopes this inaugural program is a success, allowing for new cohorts of ambassadors to participate in future years.

“But what would be best with a program like this,” she said, “is that we eventually don’t need it anymore.”