Brooks, who teaches courses on international law, national security, constitutional law and criminal justice, has had unusually varied work experiences outside of Georgetown Law. She worked at the Pentagon, as counselor to the Undersecretary of Defense, from 2009 to 2011. Earlier, she served as a senior advisor at the U.S. Department of State. Brooks is a prolific writer, of everything from op-eds to scholarly articles to books — including her most recent, How Everything Became War and the Military Became Everything: Tales from the Pentagon (Simon & Schuster, 2016). 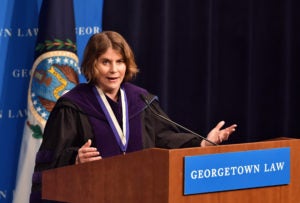 She’s a reserve police officer, teaching an experiential practicum course on innovative policing with Distinguished Visitor from Practice Christy Lopez. And the two are part of a unique educational collaboration, the Police for Tomorrow program, with Washington, D.C.’s Metropolitan Police Department.

In a speech called “Violence and the Limits of the Law,” Brooks applied what she has observed of military power in international law to police power at home.

She told the story of how her mother, author Barbara Ehrenreich (a former anti-war activist who was present at the event), once accompanied her daughter to the Pentagon. Brooks’s mother was surprised to see that this center of military power had become a one-stop shopping mall. “You can buy Tylenol at CVS, or you can send a team of army medics to fight malaria in Chad,” Brooks recalled. “You can buy a new cell phone — or…you can order the NSA to monitor someone else’s cell phone. You can buy a small edible chocolate fighter jet, or you can order up drone strikes in Yemen or Syria. You name it, the Pentagon supplies it.”

Brooks’s book argues that as the boundaries between war and peace blur, the role of the military has also blurred and expanded, as has the application of the law of war, often with disastrous results for rights and the rule of law. Today’s military personnel analyze computer code, train Afghan judges, build isolation wards for diseases and eavesdrop on electronic communications, among other things. 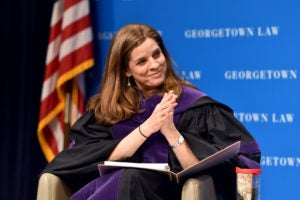 What’s at stake? In peacetime, killing is generally against the law; in war, killing can get you a medal. “Our most basic moral and legal rules are inverted in wartime, and we tolerate that…because we view war as a state of temporary exception.” But when the boundaries of war expand and blur, we begin to lose our ability to determine which actions should be praised, and which should be condemned, she said.

How does this relate to criminal justice? Similar parallels can be drawn with respect to the overcriminalization that has led to mass incarceration in the United States.

“Just as the blurring and expansion of what we consider to be war has led us to expand the role of the military, so too, domestically, overcriminalization has expanded the role of the police…,” said Brooks. “We increasingly expect the police to play multiple and often contradictory roles. We want them to serve as mediators, and protectors, as mentors, as medics…we want them to be educators, friends, social workers, and we also want them to serve as enforcers who are willing to use lethal weapons when needed to enforce the ever-expanding criminal law.”

In America, everything is becoming crime, and the police are becoming everything, Brooks said. “So here is the warning: The trends I’ve highlighted remain invisible to most Americans, but they are having a devastating effect on human rights, democratic accountability and the rule of law. Here is the challenge: it’s up to us, and particularly to those of you who are young, our students, to find a better solution… I have a few ideas about how to do this, but as you students and fellows go through these halls and classrooms here at Georgetown Law, and then enter into your own professional lives…I know that you will have even better ideas.”

As Dean William M. Treanor remarked, the Ginsburg Professorships were made possible through the generosity of Scott K. Ginsburg (L’78). Ginsburg’s recent $10.5 million gift, the largest single gift in Georgetown Law history, will allow the school to expand its Washington, D.C., campus and will also support talented faculty members. Three other Ginsburg professors will be honored in 2019. 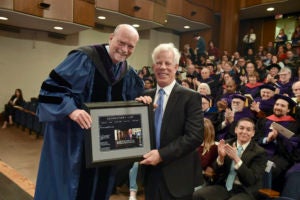 “Scott’s is a name that we all know,” Treanor said, noting that Ginsburg’s generosity has allowed the Law Center to build, design or acquire its iconic clock tower, the Ginsburg Sport and Fitness Center, the building next door, and these professorships. “Scott was dedicated to making this truly a campus…we are [a] community, principally because of [him].”

Georgetown Law, Treanor said, is indeed fortunate to have Brooks as a faculty member. He noted the many contributions she has made to the community, including her work as Associate Dean for Graduate Programs, with Police for Tomorrow and international diversity. “She’s a public intellectual whose work has made an extraordinary influence,” the dean said.

Distinguished Visitor from Practice Christy Lopez, who co-teaches the course on innovative policing with Brooks, noted that “it would be hard to find a professor anywhere with a more varied professional life.”

“When Rosa writes about how our military has become more expansive and complex, I think about the advent of police crisis intervention teams, the proliferation of SWAT deployments, policing for profit, and ‘broken windows,’”… said Lopez, who noted that Brooks is writing a new book on policing. “It’s easy for me to imagine that Rosa, having explored these questions at the international level, was eager to see how they play out at the local level. And being Rosa, that required that she immersed herself in the middle of those questions by becoming a police officer.”