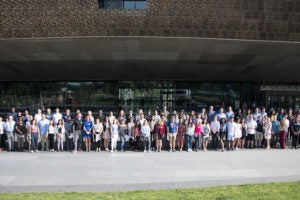 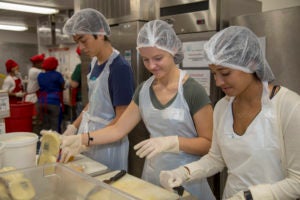 It’s 8:30 a.m. on Tuesday of Orientation Week, and Georgetown Law Dean William M. Treanor is in Room 202 of McDonough Hall, along with a group of Section 2 1L students ready to volunteer at D.C. Central Kitchen as part of the Orientation Week service projects.

Commanders in Chief: Women in the Arena of National Security

In 2018, women lawyers working in national security still might find themselves the only woman in the room. With a deep bench of national security faculty, alumnae and students, Georgetown Law is transforming that dynamic. On Saturday, March 3, at… 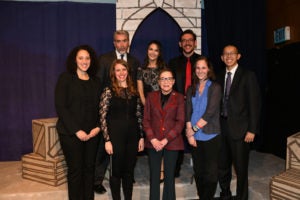 Veterans Past and Future: Making a Difference at Georgetown Law

When now-veteran Ashley Nicolas (L’19) deployed to Kandahar, Afghanistan, as an active duty U.S. Army Intelligence Officer not long after graduating from West Point in 2009, she served as a Female Engagement Team Leader — just before the combat exclusion…

Georgetown Law’s first-year J.D. class is among the best and the brightest ever seen on our campus — with a 3.79 grade point average, the highest ever. The class also has a strong commitment to public service, with experience in teaching, the Peace…

Their Future’s So Bright, They Had to Wear Shades: Orientation Week 2017

Not even a much-anticipated eclipse could shadow the enthusiasm of Georgetown Law students, faculty and staff during Orientation Week 2017. And as the 80s song goes, they even wore shades. More than 1000 new students — including 580 J.D., 567 graduate/LL… 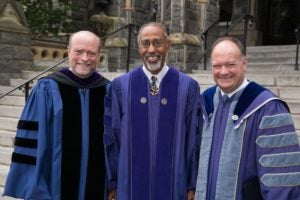 Georgetown Law welcomed more than one thousand new alumni — 637 J.D.s, 538 LL.M.s and one S.J.D. — on Sunday, May 21, as graduates and their families, faculty, staff and administrators gathered on Georgetown University’s Healy Lawn for Commencement 2017. The weather cooperated, the mood was joyous and everyone could reflect on what the day meant for them.

A Georgetown Law moot court team will advance to an international competition in Geneva, thanks to a strong showing at the European Law Students’ Association (ELSA) moot court competition in WTO law, held in Bogota, Colombia, March 1 to 6. Julia…