In the short time since Supreme Court Justice Ruth Bader Ginsburg died on Friday, volumes have been written about her trailblazing legal career.

Hundreds of Georgetown Law alumni, students and professors had their own stories of personal encounters to share, thanks to the close relationship formed between the Justice and the Law Center through the past four decades.

When President Jimmy Carter appointed then-law professor Ruth Bader Ginsburg to the U.S. Court of Appeals for the District of Columbia Circuit in 1980, her husband, tax law professor Martin Ginsburg, found his own Washington job at Georgetown Law. He served as a well-loved member of the faculty until his death in 2010. His wife must have felt at home on campus as well, returning for speaking engagements more than two dozen times over the years.

In a statement released shortly after Ginsburg’s passing, Georgetown Law Dean William M. Treanor said, “I am heart-broken by Justice Ginsburg’s death. She was an extraordinary Justice, a brilliant lawyer who changed the law through her fight for women’s rights, and an inspiration to us all. She was a great friend to Georgetown, and she and her late husband Marty were treasured members of our community.”

Treanor also mentioned his own fond memories of welcoming Ginsburg to campus and witnessing her interactions with students. At a 2019 Supreme Court Institute event honoring Justice Ginsburg’s legacy of gender equality, Treanor shared that when asked about his favorite moment of his tenure as dean, he always thought of the several occasions on which the justice addressed freshly arrived incoming students.

“It’s when Justice Ginsburg is about to speak to the first-year class, and the room is packed, and looking out at the sea of faces, many of the students wearing ‘Notorious RBG’ T-shirts, and seeing the excitement and the admiration on the students’ faces,” Treanor said. 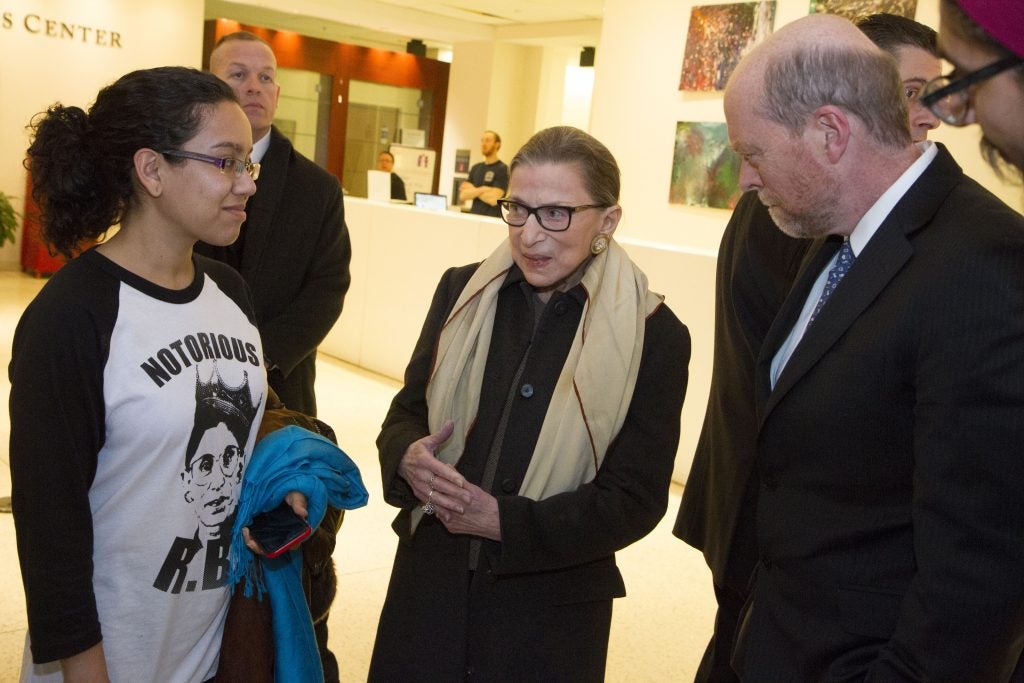 Some lucky students had opportunities to meet Justice Ginsburg in smaller settings. Adjunct professor Mary Hartnett (L’85), who with coauthor Professor Emerita Wendy Webster Williams is at work on the justice’s authorized biography, arranged several times for Ginsburg to visit the Week One course she teaches each January on “Dissenting Opinions.”

“Justice Ginsburg was incredibly generous. In 2017, we learned that President Obama was going to give his Farewell Address to the nation the night she was scheduled to make a surprise appearance in class,” recalled Harnett. “I checked with her to see if she would like to reschedule, and she asked if we might be able to watch the address from the classroom and if the students might like to stay and watch the address with her. Yes and yes! She truly enjoyed her time with students, and it always astounded me how she was able to find time for them given her relentless workload and ongoing health challenges.”

Grace Paras (L’20), former editor-in-chief of The Georgetown Law Journal, attended a small dinner with Justice Ginsburg following a February 2020 commemoration of the 100th anniversary of the 19th Amendment (see below for more information on that event).

“I was so moved by how much time Justice Ginsburg spent with the students and faculty in the room. She spent hours chatting with everyone at the table about law school, clerkships and even movies,” said Paras, adding that she was grateful to have seen the justice speak multiple times during her years at Georgetown Law. 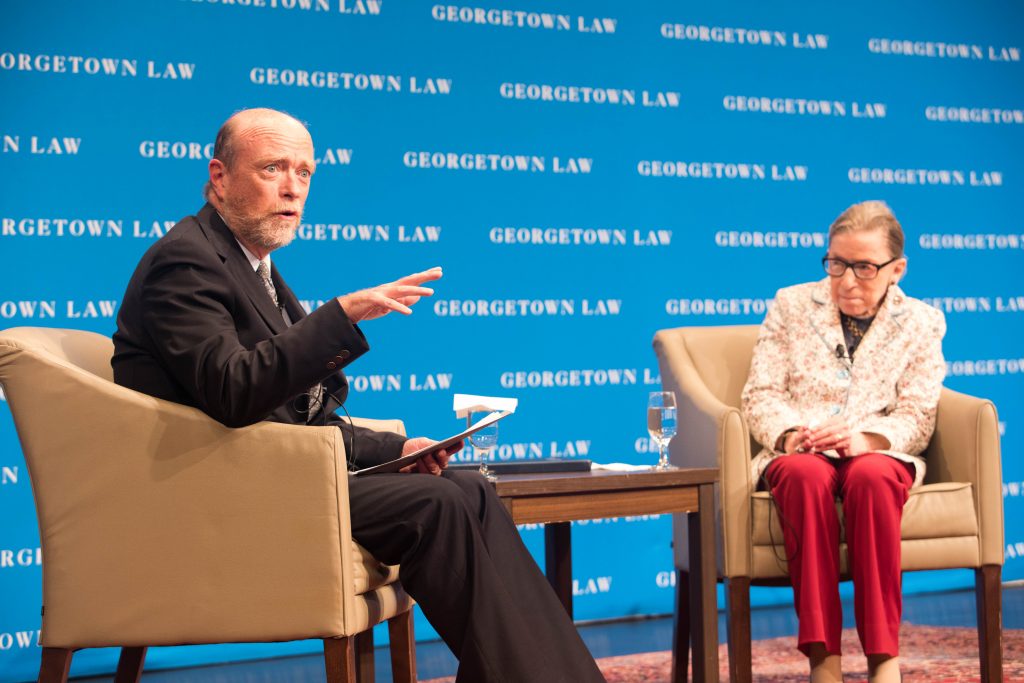 “Each time, I was overcome with emotion,” Paras said. “I knew that if not for her, I might not be sitting there. She paved a pathway for women to go to law school, and not just attend, but excel. And because she was so open with her personal story, I drew on her experiences — especially the adversity she faced — as a source of inspiration to get me through my own challenging times in law school. So many of my female peers and I felt a kinship with her, and that is a testament to her willingness to spend time with students and share her life story with them.”

1981: Judge Ruth Bader Ginsburg, shortly after joining the U.S. Court of Appeals, was the keynote speaker at Georgetown Law’s “Susan B. Anthony Dinner.” Unfortunately our archives contain no photos or video of this event, only this notice in a Law Center newsletter inviting students to help organize it.

1993: Just before the beginning of her first term on the Supreme Court, Justice Ginsburg addressed Georgetown’s Women’s Law and Public Policy Fellowship Program. She spoke of the progress women had made in the legal profession in her lifetime, and took questions from the audience. One woman wondered if she had ever dreamed of being in the job she’d just been confirmed to, asking, “When you were arguing before the Supreme Court, did you ever picture yourself up there?” Ginsburg responded that she felt her career path had been very unexpected.

“I hadn’t the foggiest notion that I could be anything like a judge,” said Ginsburg. “… I took what jobs I could get. I wanted to clerk, for example, but most of the judges on the Second Circuit wouldn’t interview me. But then one judge on the District Court was willing to take a chance and so I got that job. So I can’t say that I set any goals. And this fantastic stroke of fate — you don’t train to be a Supreme Court justice. This is an extraordinary combination of mostly luck.” 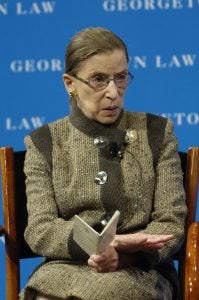 2008: The Georgetown Law Supreme Court Institute co-sponsored an event with Justice Ginsburg and The Right Honourable Baroness Brenda Hale, the first woman to serve as a Law Lord in the British House of Lords. The two women pioneers compared notes on their respective experiences, and on the differences between the American and British legal systems. Toward the end of the event, Ginsburg shared her perspective on the responsibilities lawyers hold in society.

“To me, the highest obligation someone in the legal profession has is to recognize that you have training and talent that make it possible for you to make more than a decent living, but also that equip you to make things a little better in your local community, your nation and your world… I think lawyers that don’t do that, that don’t give back to the community, that don’t do service that will help make things a little better — that those are the people who are in greatest violation of what should be the ethics of the legal profession,” said Ginsburg.

2018 and 2019: In 2018, Georgetown Law announced the establishment of an annual lecture named after Justice Ruth Bader Ginsburg, and that the series would be inaugurated by Ginsburg herself. On April 6, Ginsburg was joined in Hart Auditorium by her two official biographers, Georgetown Law professors Wendy Webster Williams and Mary Hartnett, who guided the justice through a conversation about some of the many achievements in her personal and professional lives. 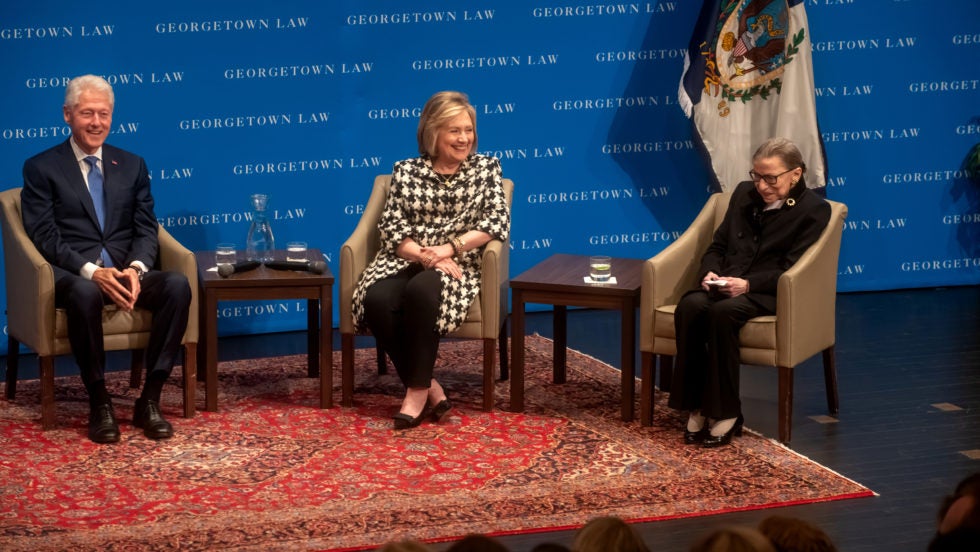 On October 30 of the following year, in his introduction to the second annual Ginsburg lecture, Dean Treanor joked that he’d been worried about finding a speaker worthy of following Ginsburg in the series, but needn’t have done so, since joining her on the stage were former President Bill Clinton (F’68) and former Secretary of State Hillary Rodham Clinton. The three offered advice to the law students in the audience, and spoke about highlights of their careers in public service (one of President Clinton’s being, of course, having put Justice Ginsburg on the Supreme Court).

2020: In what would prove to be Ginsburg’s final time on the Georgetown Law campus, she spoke at an event celebrating the centennial of the 19th Amendment, co-hosted by the American Bar Association and The Georgetown Law Journal, which featured it in a special issue of The Georgetown Law Journal. In a conversation with U.S. Appeals Court Judge M. Margaret McKeown (L’75, H‘05), Ginsburg reflected on her lifelong dedication to pursuing equality for women, inspired in part by her own mother’s teenage participation in women’s suffrage parades in New York City, and supported by her husband, whose commitment to an equal partnership in their marriage made it possible for her to rise to the highest levels of her profession. 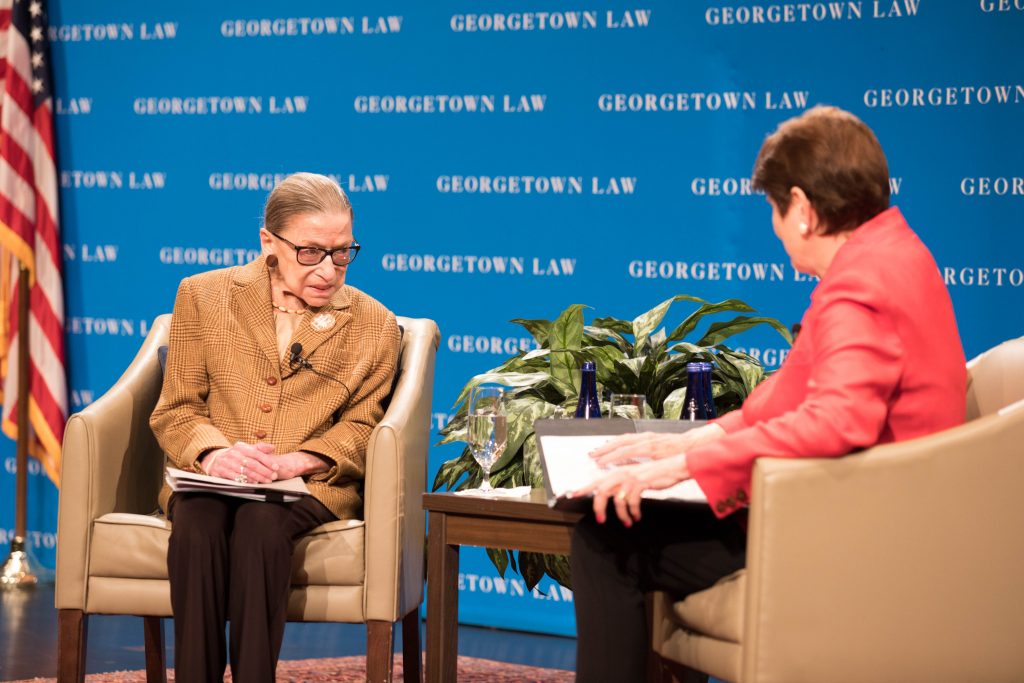 Ginsburg also marveled at how in recent years she’d become something of a pop culture icon, with a feature film made about her life and her portrait appearing on T-shirts, posters and Internet memes.

“It is amazing! I am soon to be 87, and everyone wants to take a picture with me! …It’s changed my judicial assistants’ lives, because we are flooded with requests and invitations,” said the somewhat bemused Ginsburg.

At that event, Ginsburg also talked about how contentious the Supreme Court confirmation process has become, and expressed hope that a return to a more bipartisan standard might be possible. And she said she was pleased that one of her former law clerks was spending considerable time on getting 18-year-olds to register to vote, “especially minority women.”

“I think that young people are going to make a difference,” Ginsburg said. “What our government does now will affect their lives, so they should care deeply about exercising the right to vote.”

The Georgetown Law community will greatly miss Justice Ruth Bader Ginsburg, whose life and achievements will surely inspire students for generations to come.

On Monday, September 21, Georgetown Law hosted an online remembrance of Justice Ginsburg, with remarks from her official biographers and from other faculty members who knew her well. View the virtual event below.