Learning by Experience Starts Week One at Georgetown Law

Ryan Trumbauer (L’22) knows what interests him about the law. He’s a Technology Law & Policy Scholar whose studies are focused on the internet and cross-border conflicts. When he was deciding whether to participate in Week One this year, a simulation course on the mediation of an international internet defamation case caught his attention.

Alternative dispute resolution hadn’t been a focus of his before, but the short one-week commitment required meant that he could view the course listings as “a menu where you get to try an appetizer now before choosing a main course later.”

Elizabeth LaPaugh (L’22) enrolled because her prior involvement with service-oriented coursework as an undergraduate at the University of Alabama had built her respect for hands-on experiential learning. She looked forward to opportunities to build relationships with her fellow students and to engage with legal issues. 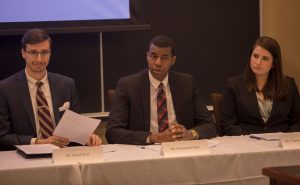 Week One is a program of elective J.D. courses that takes place over four days in the week prior to the start of the spring semester. The 1L offerings all give first-year students an early chance to participate in legal simulations, which are designed to develop skills such as interviewing, teambuilding, investigation, negotiation and collaboration.

This year’s simulation courses covered a wide variety of topics including corporate compliance, international arbitration, internet defamation, global health law, social intelligence, environmental law and extradition. Alternating between segments of instruction and role-play, students took on roles of attorneys of all stripes, and even expert witnesses, as in the case of “Congressional Hearing Simulation: Updating the Fair Labor Standards Act for Today’s Economy,” taught by Professors Indivar Dutta-Gupta and Laura Tatum of Georgetown Law’s Center on Poverty and Inequality.

The Art of Lawyering 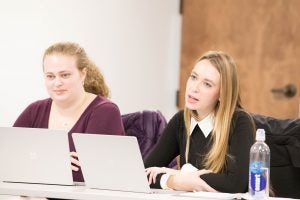 On the first day of Week One Trumbauer and LaPaugh joined a group of students attending Professor Julie Ross’s course “Internet Defamation Simulation: Alternative Dispute Resolution in a Transnational Dispute.” Ross provided an overview of the class, which was then broken into three groups. Each was to approach a different role in the simulated case with the assistance of two upperclass teaching fellows, who facilitated the breakout sessions and played the roles of client, arbitrator and mediator. Soon, students placed in the group representing the plaintiff split into pairs to prepare for their first client interview.

Once the exercise began, however, Trumbauer, LaPaugh and classmates saw they had an extremely aggrieved client to deal with, and one who had already had a firm sense of the outcomes he expected. It became clear to students that a successful resolution to the international arbitration hearing and mediation session to come in the week ahead would mean not only negotiating with the opposition, but also with their own client.

Teaching fellow Bryan Burcat (L’21) had fun playing the emotional client. After taking the course himself as a 1L and finding it valuable, he said he saw participating this year as an opportunity to give back to the Georgetown Law community. And recently, when asked about his interest in international arbitration at a job interview, he was able to cite the course as a motivation to explore professional opportunities in alternative dispute resolution. 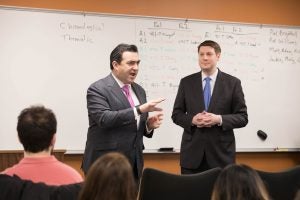 Most of the upperclass Week One courses are not experiential, but this year 2Ls and 3Ls also had the opportunity to participate in a simulation during Week One, with a new course: “White Collar Criminal Practice: International Scandal Investigations,” taught by Professor Frances C. DeLaurentis and Professor RJ Coleman.

Among the more traditional classroom-based Week One offerings for upperclass students, “Supreme Court Topics: The Role of Dissenting Opinions” remained a perennial favorite. Taught by Adjunct Professor Mary Hartnett, a biographer of Supreme Court Justice Ruth Bader Ginsburg, the course focuses heavily on Ginsburg’s use of dissent to shape the legal landscape.

So who better to have as a surprise guest than Justice Ginsburg herself, who joined the class in person Wednesday evening, much to the students’ delight. Also, joining via video chat, was U.S. Appeals Court Judge M. Margaret McKeown (L’75), continuing a long relationship with the school that includes her recent past leadership of the Dean’s Board of Visitors.

The next day, Hartnett’s students listened to oral arguments from Harris Funeral Homes v. EEOC, the Supreme Court case on transgender employment discrimination. Although the Court has yet to issue its decision, the students made theirs after convening in mock conference. Then each had to draft a bench dissent as their final assignment.

Setting the Stage for What Comes Next

As the week progressed, students described a renewed excitement about legal practice and an increased confidence in their ability to put their studies to use in actual conflicts. 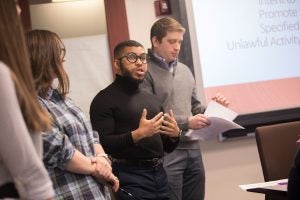 “Week One courses are a truly unique experience to explore a difficult and ever-changing part of the law in a friendly environment led by terrific faculty,” said Trumbauer, who now plans to explore more classes in defamation, internet privacy, and international arbitration.

Josh Mogil (L’20), who has participated in Week One as a 1L student, a 2L teaching fellow, and this year as a 3L teaching fellow leader, said above all the program has helped equip him for legal practice.

“As I near graduation, I’m grateful for the opportunity to have participated in Week One,” he said. “Georgetown’s commitment to experiential learning sets this school apart and will allow me to hit the ground running as I kick off my legal career.”