“Your experience [has] been shaped by the world events that happened when you were together at Georgetown Law,” Treanor said, noting that the Law Center’s 147th graduating class has been together during some of the most politically charged and divisive moments in our nation’s history. “I have been struck by the fact that this has not discouraged you. It has motivated you to use your talents to make this world a more just place.” 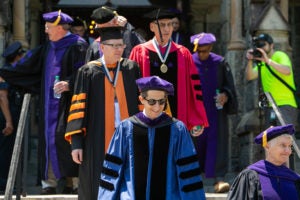 Treanor expected the graduates to “use your law degrees to advance justice and to advocate for the causes that are most important to you”— like the two honorary degree recipients celebrated that day: Judge Emmet G. Sullivan of the U.S. District Court for the District of Columbia and New York Solicitor General Barbara Underwood (L’69). “I look forward to the great work and you will do in the years ahead as graduates of Georgetown Law.”

The Best of the Legal Profession

Professor Emma Coleman Jordan introduced Sullivan as someone with an “unfailing commitment to civility, professionalism, and fair execution of justice” who “exemplifies the very best of the legal profession.” The longest-serving active judge on the District Court for D.C., Sullivan has been a vocal advocate for requiring prosecutors to be reminded in court of their obligation to seek out and provide potentially exculpatory evidence to the defense. On May 8, Jordan noted, U.S. Senators and Georgetown Law alumni Dan Sullivan (R-Alaska)(L’93, MSFS’93) and Dick Durbin (D-Illinois)(F’66, L’69) introduced the Due Process Protection Act, legislation to reinforce the constitutional right of defendants to access favorable and relevant evidence obtained by prosecutors. 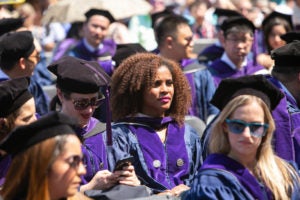 Jordan also noted that when Judge Sullivan learned that a mother and daughter had been deported while their asylum case was pending before him, he ordered the government to bring them back to the United States. “He is a reminder of what it means to truly uphold the law,” Jordan said.

Professor Irv Gornstein introduced Underwood, who delivered the address to the graduates. First in her class at Georgetown Law in 1969, Underwood became the first woman graduate of the school to clerk on the Supreme Court (for the late Justice Thurgood Marshall), the first woman to serve as acting Solicitor General of the United States and the first woman to serve as attorney general of New York, among other things. “She has left a number of smashed ceilings along the way,” Gornstein said, noting Underwood’s “unbounded commitment to equality and steadfast devotion to public service.”

In her Commencement speech, Underwood highlighted why it is critical for women to be leaders — and indeed, trailblazers — in the legal profession and in society as a whole.

“[Women’s] experiences can matter in decisionmaking…” she said. “Justice Marshall knew — we all know — that women, or African Americans, do not always vote together, and certainly [when acting as jurors] they do not always favor the litigant who looks like them. But women, like other groups, bring to decisionmaking their own distinctive life experience and then they each use it differently… Justice Marshall understood the connection between race discrimination and sex discrimination and had no patience for either one.” 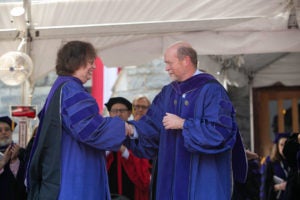 Retired Justice Sandra Day O’Connor, Underwood noted, mourned the late Justice Marshall because he brought a perspective shaped by his life experiences, and “he was constantly pushing and prodding the others to see what he saw.”

“That’s one of the most important challenges of our times,” she said. “To bring into the courts and the law firms, the board rooms and executive suites, in business and in government, in the academy and in all the institutions of society, many different perspectives, so that you can have the tools to build the bridges that are needed to unite, rather than divide, our large and diverse nation.”

Advice to the Class of 2019? “When you go out into the world and into the legal profession, try to make it a better place. Try to make your distinctive voice heard, and listen to as many different voices as you can,” Underwood said. “And also, don’t be afraid of being a pioneer. It turns out to be a pretty rewarding thing to do.”

Aaron Steeg (L’19) called Underwood’s remarks “inspirational.” “It’s amazing to hear from a trailblazer like her who really led the day for a lot of people to come after her.” 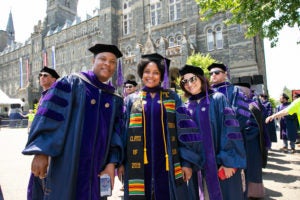 Steeg will now work at Winston & Strawn, where he hopes to work in sports law. Reflections on the day? “It’s the culmination of three years of really hard work, and lasting and beautiful friendships.”

Annie Chen (LL.M.’19), from Taiwan, is looking forward to a future possibly working with an NGO. She came to Georgetown Law to learn about global and U.S. health issues, such as private health insurance. What did she enjoy the most about the LL.M. experience? Courses with some of the best professors around the world. “[Professor Larry Gostin] is at the top on the list within this field,” she said, “so we have a lot of resources.”

“I believe in our lives we encounter people who teach us how to live,” Nicolas said. “Cedric was one of those people.” 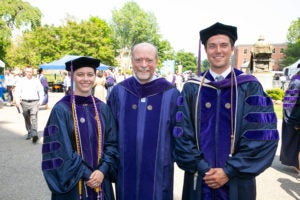 The Class of 2019, Nicolas noted, witnessed a time of tremendous change that first year — when lawyers were stepping up as protectors of the rule of law and defenders of the republic: at the borders, in airports, marching in Washington, D.C. “It’s now our turn… she said. “I couldn’t feel more prepared to enter that fight with all of you. Throughout our careers, no matter where they take us, we are going to work in the service to others for what we know is right.”

Nicolas was elected Section 2 speaker owing to her service in the U.S. Army, where she received a Bronze Star; for her roles as co-president of Georgetown Law’s Military Law Society and as a member of the Global Law Scholars program, and many other accomplishments. Nicolas and Ryan Shymansky (L’19) also received the Dean’s Achievement Award. 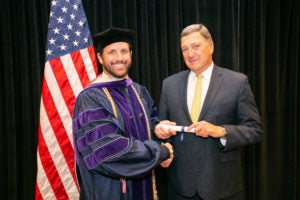 For Emma Mlyniec (L’19), the best part of the day was getting to share the Georgetown Law experience with her proud dad, Georgetown Law Professor Wally Mlyniec (L’70). Emma, a Blume Public Interest Scholar, will clerk for Judge Catharine F. Easterly on the D.C. Court of Appeals.

“It’s pretty extraordinary,” said Professor Mlyniec, who graduated from Georgetown Law 49 years ago. “And to know that the generation that comes after us,” he joked, “is so much smarter than we were.”